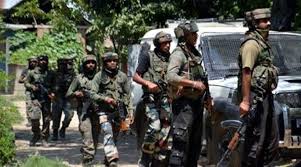 Three security personnel and a civilian were killed in an encounter in Jammu and Kashmir’s Kupwara district on Friday. Sources said that during search operation a terrorist, who was presumed dead, suddenly stood up and started firing at the security personnel. One of the two militants, presumed dead, firing at security forces in which two local policemen were killed. Four people were also injured in clashes.

Security forces launched a cordon and search operation in north Kashmir’s Kralgund village in Handwara following information about the presence of militants there, the officials said

They said the search operation turned into an encounter after militants opened fire at the security forces, who retaliated. Authorities have suspended mobile internet services in Handwara and Sopore.

News agency PTI quoted officials as saying that there was lull in firing several times during the day but the militants would resume firing as soon as the security forces advanced towards the house where they were hiding.

PTI reported that four people were also injured in clashes between a group of youngsters and security personnel near the encounter site. Authorities had also suspended mobile internet services in Handwara and Sopore.

On Wednesday, a Pakistani was among two Jaish-e-Mohammed (JeM) terrorists killed in a firefight with security forces in south Kashmir’s Shopian.