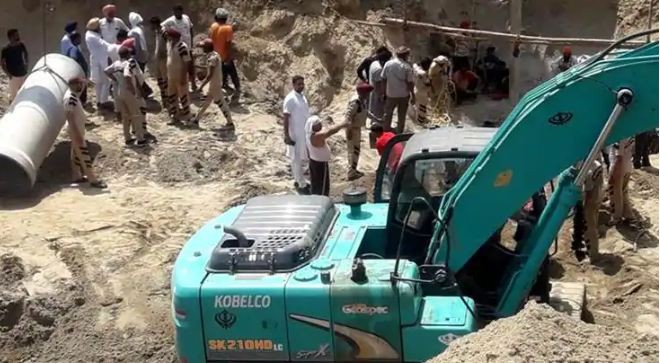 Over 36 hours after a child, who turns two on Monday, fell into a dry abandoned borewell, efforts to rescue him are underway in Bhagwan Pura village of Sangrur district on Saturday. The incident took place on Wednesday when Fatehveer Singh accidentally fell into the dry borewell covered with jute bags while playing outside his house.

A team of the National Disaster Response Force (NDRF) reached the spot on Thursday and began the rescue work. The child is being provided with oxygen and his movements are being monitored.

The borewell is 9 inch in diameter and up to 150 feet in depth. A parallel pit is being dug up by NDRF at the spot to manually rescue the child. At the time of writing of this report, about 25 feet of digging remained.  Meanwhile, Cabinet minister and Sangrur MLA Vijay Inder Singla is also reaching the spot.

Talking to The Indian Express, SDM Sunam Manjeet Kaur said, “Artificial oxygen is being supplied to the child through a pipe inside the borewell. Today we saw a movement of his hands and even tried to pull him up through ropes. However, due to the tender age, he could not be pulled as arms could have been damaged. Now NDRF team is digging a parallel pit on the other side from where a person will go manually to rescue the child.”

Inconsolable parents are continuously urging the administration to rescue their child. Sukhjinder Singh, father of the child said, “Fateh was born after 7 years of my marriage, I don’t know how he fell. I just want the administration to take him out.” The borewell is 9 inch in diameter and up to 120 feet in depth.

Meanwhile, the entire village has come down to the spot in anticipation of the child being brought out safely. The incident has also raised several questions on part of the local administration over lapses in covering the borewells and creating awareness.