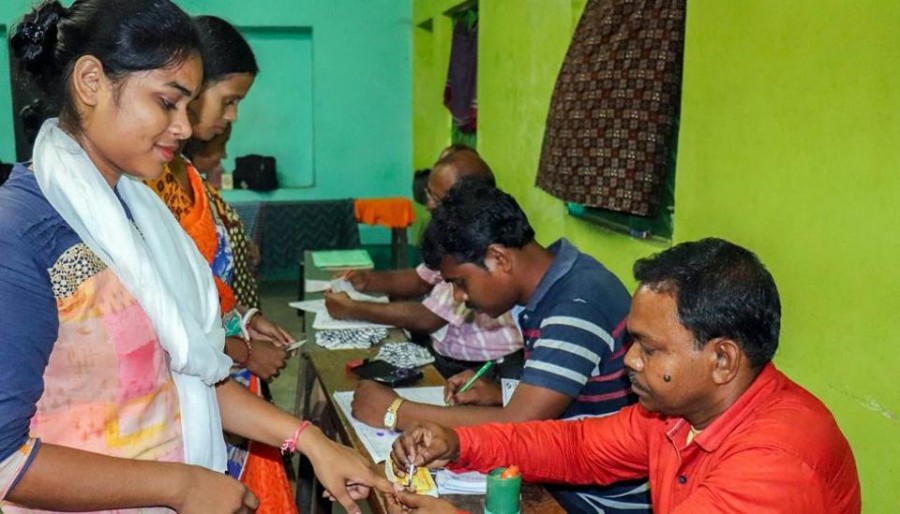 Nearly fifty per cent polling was recorded till 4 pm on Monday for elections to 72 seats across nine states in the fourth phase of 2019 Lok Sabha elections amid PM Modi’s appeal for ‘record voting’ and reports of EVM glitches & clashes from several areas. The Election Commission website reported 49.62 per cent voter turnout till 4 pm even as long queues of voters waited outside booths across states to cast their vote.

In West Bengal, where the Mamata Banerjee-led Trinamool Congress is facing its toughest challenge against the Bharatiya Janata Party (BJP), BJP candidate Babul Supriyo’s car was vandalised There were also reports of clash between Trinamool workers and security personnel in the state, where eight seats are voting today..

In phase three, one person had died in political clashes while the car of CPI(M) candidate Md Salim was attacked in Islampur during the second round.

As in earlier phases, this time too Prime Minister Narendra Modi tweeted urging voters to ‘break record of previous three phases’. Home minister Rajnath Singh also appealed to the voters saying: ‘Your vote will help shaping of a New India’.

Long queues were seen outside booths in Jharkhand, Rajasthan and Uttar Pradesh with complaints of malfunctioning EVMs reported from several booths in Rajasthan and Maharashtra.

Unlike the previous phase, when Jammu and Kashmir’s Anantnag recorded 0% polling in the first two hours, on Monday voters turned up early at several booths. Monday is the second round of voting in Anantnag, which is scheduled go to polls in three phases.

With this phase, polling ends in Maharashtra and Odisha, while the process starts in Rajasthan, Madhya Pradesh and Jharkhand. Twenty-six seats in Bihar, Uttar Pradesh and West Bengal are also voting in this phase. These three states have seats going to polls in each of the seven phases in the 2019 elections.

Seventeen seats in Maharashtra are voting on Monday, which is the largest among the states going to polls in the fourth phase. The BJP-led National Democratic Alliance (NDA) won all of these seats in 2014, an increase of 11 seats from its 2009 tally.

Among the 19 seats that will vote in the states of Madhya Pradesh and Rajasthan, the BJP won 18 in 2014.

While polling in Rajasthan will end in the fifth phase, Madhya Pradesh will vote in four phases beginning on Monday. Asansol, one of the two seats which the BJP won on its own in West Bengal in 2014, is among the eight seats which will go to polls on Monday.

The All India Trinamool Congress currently holds six out of the eight seats which will vote on Monday. The BJP will also try and defend 12 out of 13 seats in the constituencies going to polls in UP. Repeating this performance will not be an easy task given the fact that the Samajwadi Party and the Bahujan Samaj Party have an alliance this time.