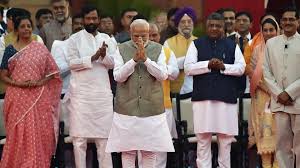 Narendra Modi was sworn in as prime minister for a second term on Thursday at the head of a 25-member cabinet in which he enlisted Bharatiya Janata Party (BJP) president and close confidant Amit Shah, dropped several key members of the outgoing government and attempted to accommodate most partners in the ruling coalition, but failed to convince key ally Nitish Kumar to join his new ministerial council.

The new cabinet is expected to hold its first meeting in the evening today and the allocation of portfolios will also be done soon.

President Ram Nath Kovind administered the oaths of office and secrecy to Modi, dressed in a beige Nehru jacket, and his colleagues at a ceremony on the sprawling forecourt of Rashtrapati Bhavan in the presence of foreign dignitaries, leaders of the National Democratic Alliance (NDA), and national and regional politicians.

“Honoured to serve India,” Modi, 68, wrote in a Twitter post that popped up on the microblogging site as the ceremony started at 7 p.m. before an audience of 8,000 people, who included United Progressive Alliance chairperson Sonia Gandhi and her son and Congress president Rahul Gandhi, both seated on the front row.

Shah, 54, whose inclusion in the cabinet had been much speculated upon, was administered the oaths after Modi and Rajnath Singh, indicating the order of seniority in the new government , which took office exactly a week after results from the 17th general elections were declared. Singh will continue to enjoy the number two status in the Modi government, which means he chairs the meeting of the cabinet in the absence of the prime minister.Arun Jaitley, finance minister in the outgoing government, had on Wednesday opted out of the new government for health reasons.

Outgoing external affairs ministers Sushma Swaraj didn’t find a place in the first list of appointees to the new council of ministers. “Mr Prime Minister, you gave me the opportunity to work for Indian citizens and the overseas Indian community as the external affairs minister for five years and gave me immense respect at a personal level through my term. I am deeply grateful to you. I pray to God that our government runs successfully.

Drinking water and sanitation minister Uma Bharti, who did not run for election, and Anant Geete of the Shiv Sena, who lost election, were also missing.

Swaraj’s omission came as a surprise to many. Swaraj, the Vidisha MP in the last Lok Sabha, announced last year that she will not contest the Lok Sabha election but will remain active in politics.

A surprise inclusion was former foreign secretary S. Jaishankar. Portfolios of the new ministers were expected to be announced late on Thursday night.

Giriraj Singh and Gajendra Shekahwat, both junior ministers in the previous government, got a promotion.

Shiromani Akali Dal (SAD) MP from Bathinda, Harsimrat Kaur Badal, and BJP MP from Asansol, Babul Supriyo, and Lok Janshakti Party leader Ram Vilas Paswan also took the oaths.The oath-taking ceremony was preceded by a meeting of Modi with the incumbent ministers at his residence at 5pm. Shah called all those who had been selected to join the cabinet to inform them, after a series of meetings with the PM over the span of three days.

Janata Dal (United), which fought the election in Bihar in alliance with the BJP, will stay within the NDA fold but not join the government, party leader Nitish Kumar said, striking the only sore note on the day of the new cabinet’s inauguration.

“They {the BJP} said that they want to give one cabinet rank to every ally. Then we said that we will discuss it with the party members and then only we can say anything over this symbolic representation. I spoke to my party leaders and people and they were not agreeing to one berth and the symbolic representation. And this we communicated to them {BJP}. They also called up in the morning and then we again conveyed our decision,” Kumar told journalists in New Delhi.

ven so, the Bihar chief minister was present at the swearing-in ceremony, which was boycotted by the BJP’s arch rival Trinamool Congress, the ruling party in West Bengal. Trinamool leader and Bengal CM Mamata Banerjee kept her party away to protest the invitation extended to family members of 54 purported BJP victims of political violence in her state.

The BJP won 303 seats and the NDA 356 in the 543-member Lok Sabha, decimating the opposition including the Congress, which ended with just 52 seats and is battling an internal crisis after Rahuol Gandhi accepted responsibility for its humiliation and offered to step down, adamantly refusing to reconsider the decision rejected by the Congress Working Committee, the party’s main decision-making body.Chief Ministers of the two Telugu states – Telangana’s K Chandrashekhar Rao and Andhra Pradesh’s YS Jagan Mohan Reddy – missed the swearing-in ceremony in New Delhi because they were denied permission to land in New Delhi after the capital’s airspace was shut to non-scheduled flights for security reasons.

Leaders or envoys from the Bay of Bengal Initiative for Multi-Sectoral Technical and Economic Cooperation, or BIMSTEC, were in attendance at the ceremony. BIMSTEC comprises Bangladesh, India, Myanmar, Sri Lanka, Thailand , Nepal and Bhutan. Also present were the leaders of Kyrgyzstan and Mauritius .

Delhi police put in place tight security for the oath-taking ceremonyy. “Apart from security arrangements we have coordinated arrangement with traffic also. Around 8,000 to 10,000 police personnel along with traffic personnel have been deployed”, said Madhur Verma, deputy commissioner of police, New Delhi.