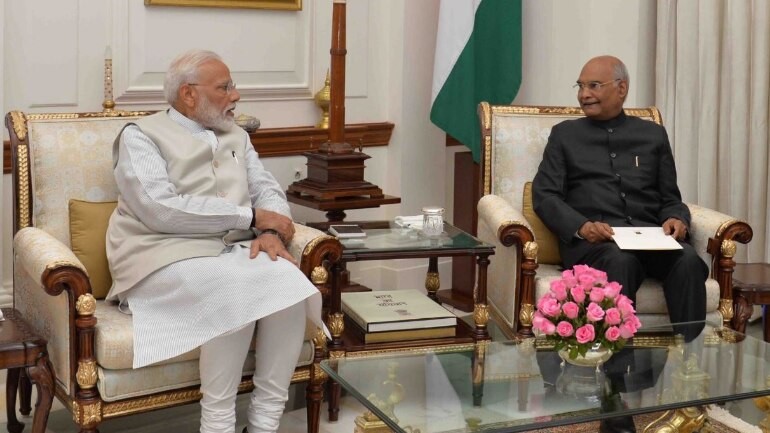 Having registered a thumping victory in the 2019 Lok Sabha elections, NDA will be meeting in the Capital on Saturday to decide on government formation. Narendra Modi is expected to be chosen as the Prime Minister of the second term of the NDA government.

The National Democratic Alliance (NDA) has emerged victorious with historic numbers and a better tally compared to the 2014 results.

While the BJP alone managed to get over 300 seats, the total NDA tally comes to nearly 350 seats.

The stage is all set for the 17th Lok Sabha to be led by Narendra Modi. With a majority of the newly elected MPs belong to the BJP and NDA, they will be formally electing Narendra Modi as their leader.

This will set in motion the process of the formation of the new government.

While the BJP has won 302 seats, with one more result pending, the NDA has nearly 350 members in the Lok Sabha.

As Narendra Modi has already been announced as the prime ministerial candidate of the NDA, the meeting is being seen as a mere formality.

The meeting of the MPs will be taking place in Parliament's Central Hall at 5 pm today where Modi is likely to address them.

In the meeting, Narendra Modi is expected to be formally elected as the leader of NDA, allowing him to approach the President to stake claim to government formation.

Narendra Modi's swearing-in ceremony is likely to take place on May 30 at the Rashtrapati Bhavan, sources claim. He may also visit Varanasi from where he won the Lok Sabha elections with a margin of 4.79 lakh votes.

PM Narendra Modi on Saturday said that he would also visit his mother in Gujarat to seek her blessings.The Union Cabinet met on Friday at the Prime Minister's Office on Raisina Hill in New Delhi. A resolution was passed to dissolve the 16th Lok Sabha, which was constituted on May 18, 2014.

It was immediately followed by a Union Council of Ministers meeting at the Parliament Annexe building.

From the Parliament Annexe Building, PM Narendra Modi drove to Rashtrapati Bhavan and tendered his resignation to President Ram Nath Kovind, along with that of his Union Council of Ministers.

A press communique from the President House later read, The President has accepted the resignation and requested Shri Narendra Modi and the Council of Ministers to continue till the new Government assumes office.

In the evening, President Kovind hosted the entire outgoing Union Council of Ministers over dinner.All eyes are now on the NDA Parliamentary Party meeting in Parliament’s Central Hall on Saturday at 5 pm, that will elect Narendra Modi as the leader.

The 17th Lok Sabha has to be constituted before June 3. The process to form a new House will be initiated when the three Election Commissioners meet the President in the next few days to hand over the list of newly-elected members.