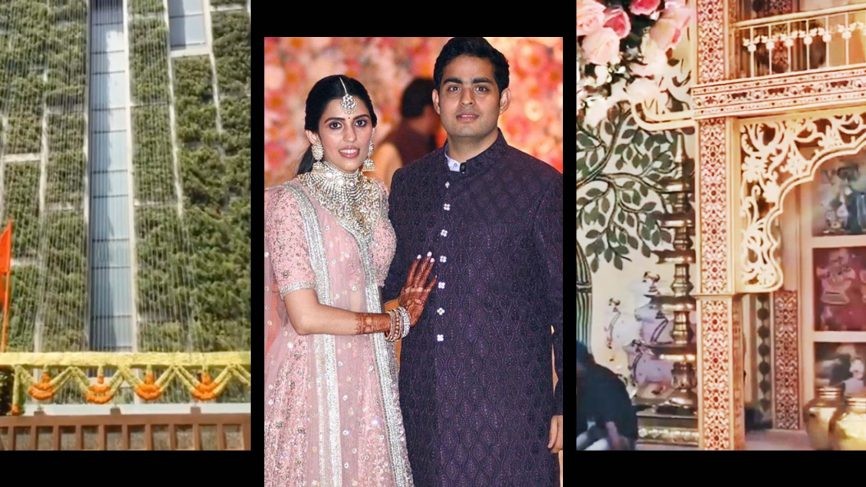 Akash Ambani and Shloka Mehta will tie the knot today in a grand ceremony on March 9 in Mumbai.  The wedding will take place today at the Jio World Centre in Bandra Kurla Complex, Mumbai at 7.30pm. Before that the Mangal Baaraat will assemble at the Trident in Mumbai at 3.30pm. For the wedding ceremony at Antilia, many A-listers from politics, showbiz and business are expected to be a part of the wedding celebrations.

Celebrations have begun as the nation gears up for one the biggest and the most extravagant wedding of the year. Akash Ambani the eldest son of Asia's richest man Mukesh Ambani and Nita Ambani, is tying the knot today with Shloka Mehta, daughter of diamantaire Russell Mehta and Mona Mehta.

For the wedding celebrations today, the Ambani house, Antilia is all decked up in gorgeous decorations.

The wedding will take place today at the Jio World Centre in Bandra Kurla Complex, Mumbai at 7.30pm. Before that the Mangal Baaraat will assemble at the Trident in Mumbai at 3.30pm. From there the baaraatis will leave for the Jio World Centre, where a high tea will be hosted for the guests at Jio 6.30pm.

Needless to say, the wedding festivities are going to be nothing less than a royal affair.

The wedding festivities for the grandest event of the year were kickstarted on February 23, 2019 with a grand bash in St. Moritz, Switzerland. It saw many big names like Shah Rukh Khan, Alia Bhatt, Ranbir Kapoor, Karan Johar, Malaika Arora and Arjun Kapoor among others. The celebrations took place at the Badrutt Palace.

The celebrations in Switzerland ended with a bang and saw performances by Chris Martin of Coldplay and The Chainsmokers.

The couple also hosted a private musical night at Antilia, which was followed by the Mala and Mehendi function, a Sangeet ceremony and Anna Seva at the Jio World Centre.