Entertainment / Akshay-Vidya Starrer ‘Bhool Bhulaiyaa’ to Get a Sequel 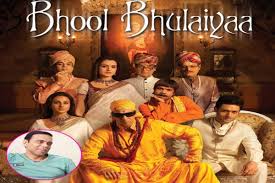 Bollywood appears to be looking to the past for inspiration with several sequels and remakes of popular films in the pipeline. The latest appears to be a follow-up to Akshay Kumar and Vidya Balan’s 2007 horror comedy Bhool Bhulaiyaa.

According to a report by Mumbai Mirror, producer Bhushan Kumar of T-Series had recently registered the title Bhool Bhulaiyaa 2. The film will be helmed by Farhad Samji, who has directed Housefull 3 and Housefull 4 and is a writer for the upcoming remake of Coolie No 1 with Varun Dhawan, Rohit Shetty’s Sooryavanshi, Baaghi 3 and Laxmi Bomb.

The film will reportedly feature a new cast, which is still to be determined. According to a source quoted by the publication, the Bhool Bhulaiyaa sequel is still in its nascent stage.

Bhool Bhulaiyaa was an official remake of Rajinikanth’s 2005 film Chandramukhi. Vidya Balan and Shiney Ahuja play a couple who decide to stay in their ancestral home despite being warned of ghosts on the premises. Supernatural occurrences force him to call on the help of his friend, a psychiatrist, played by Akshay.

Akshay Kumar will be seen opposite Kareena Kapoor in Good News, which hits theatres on 27 December. He has also been signed on for Rohit Shetty’s cop drama Sooryavanshi, which is slated for release on Eid 2020.Vidya Balan has recently been roped in to play ‘human computer’ Shakuntala Devi in Math Genius, which will be directed by Anu Menon. Devi earned the moniker for her talent to memorise and compute numbers in record time, which earned her a spot in The Guinness Book of World Records in 1982.