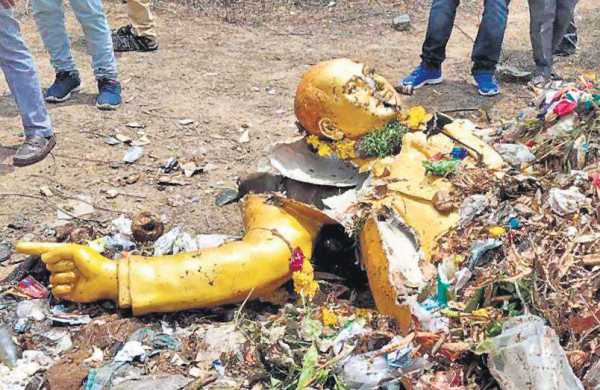 A day before the 128th BR Ambedkar Jayanti, controversy broke out over a 10-foot-tall statue of the leader in Hyderabad on Saturday, 14 April, after the Greater Hyderabad Municipal Corporation (GHMC) officials removed and seized it, citing “no permission” was sought.

According to a report in The News Minute, members of the Jai Bheem Society had gathered to install a statue of Ambedkar in front of the Hyderabad Central mall. Soon after, however, they were stopped by GHMC officials as they had failed to take the required permissions.

The officials subsequently seized the statue around 4 am on Sunday. The seized statue was found broken and dumped in the garbage later in the day.

Members of the Dalit organisation staged protests after finding the statue in a garbage truck, the report added.

Pictures of the damaged structure in a garbage truck soon went viral and evoked strong reactions.

After news broke out about Ambedkar’s statue, GHMC authorities ordered an internal inquiry and also lodged a complaint with the Hyderabad Police Commissioner, in a bid to control the situation.

"GHMC Commissioner Dana Kishore sought detailed probe by contacting Hyderabad police Commissioner. Action was taken against Yousufguda Yard Operator Balaji by moving him out of the duty.’’ GHMC authorities said in a press statement, as per a Times of India report.

Jawahar Nagar police has also registered a case under Scheduled Caste and Scheduled Tribe (Prevention of Atrocities) Act and 427 of IPC based on the complaint.