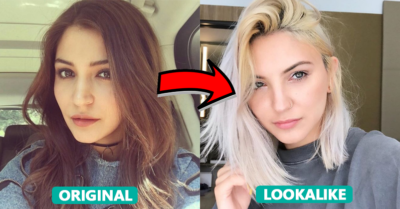 On Monday, a photograph of Anushka’s doppelganger, the American singer and songwriter Julia Michaels, was all over the media for her striking similarity with the Zero actor. Now, Anushka, too, has acknowledged it. Retweeting a collage of her doppelganger and herself, Anushka wrote that indeed they looked alike and that she was waiting for the five others, who looked like them, to show up.

She wrote, “OMG YES!! I’ve been looking for you and the remaining 5 of our dopplegangers all my life.”

There have been lookalikes in the past too, particularly of actors like Dev Anand, Amitabh Bachchan, Shah Rukh Khan and Salman Khan to name a few. However, many of them came nowhere close to Anushka’s doppelganger.

Only on Tuesday, yet another doppelganger of Alia popped up on the internet. If Anushka’s only looks like her, Alia’s lookalike even behaved like the Raazi actor. A clip with a girl, who is called Sanaya on Instagram, went viral which shows her saying the now-famous “dhoptungi” dialogue from her upcoming release, Gully Boy. This girl, dressed like Alia, copied the actor’s mannerisms exactly like the original.

Meanwhile, on the work front, last year was a mixed bag for Anushka. Her film, Sui Dhaaga turned out to be a hit, but the much-publicised Zero, that also boasted of big stars like Shah Rukh Khan and Katrina Kaif, turned out to a dud at the box office.

Soon after Zero released, Anushka Joined her husband Virat Kohli, who was touring Australia and New Zealand as part of the cricket series India played in both the countries. Their pictures from the two nations have charmed their fans no end. The duo recently returned to India.