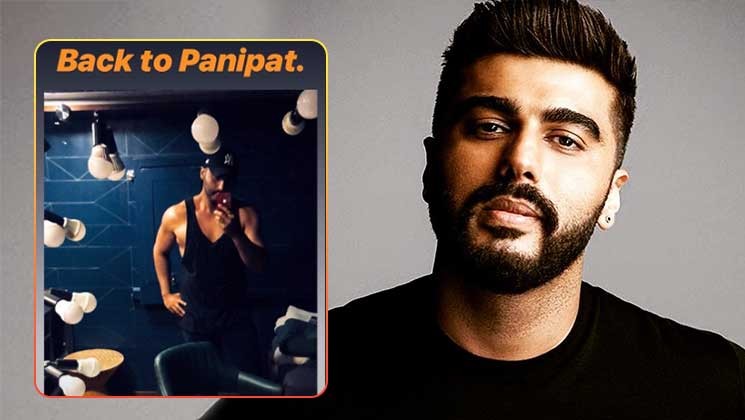 Arjun Kapoor has resumed shooting for his upcoming film Panipat. The actor posted a picture from his dressing room on his Instagram story and wrote, “Back To Panipat.”

In the picture, the 33-year-old can be seen flaunting his post-workout body in a black vest and track pants, coupled with a cap. Earlier today, the actor took to his Twitter handle and posted a picture during promotions for his upcoming film India’s Most Wanted.

“Say hello to my (2) little friends... literally Scar-faced... find my Panipat injury if u can... India’s Most Wanted promotion,” he captioned the post. In the picture, Arjun is seen sporting a funky t-shirt, sunglasses, and a cap, flaunting his biceps while posing for the picture.

Panipat, which also stars Sanjay Dutt and Kriti Sanon, is based on the Third Battle of Panipat fought between the Maratha empire lead by Sadashiv Rao Bhau and invading forces of Ahmad Shah Abdali, the King of Afghanistan. The battle took place on January 14, 1761, at Panipat, and is considered to be one of the most eventful battles fought in the 18th century. The film helmed by Ashutosh Gowariker is slated to release on December 6, 2019.

Arjun will next be seen in Raj Kumar Gupta’s India’s Most Wanted, which is scheduled for release on May 24. The official trailer of Rajkumar Gupta’s India’s Most Wanted, was released on Thursday, May 2. The 150 seconds trailer gives us a glimpse of Arjun Kapoor’s role, who can be seen toiling hard to hunt down a terrorist being referred as ‘India’s Osama’. He will also star in Sandeep Aur Pinky Faraar alongside Parineeti Chopra.