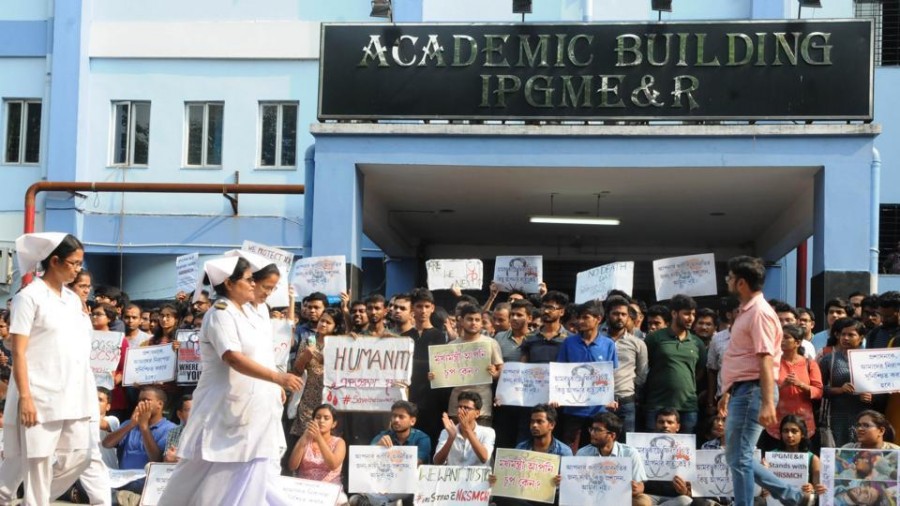 State-run healthcare services continued to be severely affected in Bengal for the fourth consecutive day on Friday with junior doctors continuing their strike in defiance of chief minister Mamata Banerjee’s ultimatum to join work a day earlier.

On Friday morning junior doctors, however, allowed patients to be taken to the emergency section of the NRS Medical College and Hospital that was closed since Tuesday. But they did not treat patients at the emergency that was being manned by senior medics.

The outdoor patients department continued to be closed in almost all state-run hospitals.

The junior doctors have been on strike since Tuesday in protest against the brutal assault on two colleagues in Nilratan Sarkar Medical College and Hospital on Monday night by family members of an octogenarian patient who passed away.

The CM, who holds the health and family welfare portfolio, visited the state-run SSKM hospital around noon on Thursday in the wake of the continuing disruption in medical services and warned junior doctors of action if they did not resume work by 2pm.

Following the warning by Banerjee, emergency services started at SSKM Hospital and Burdwan Medical College. But junior doctors refused to buckle down and continued to protest.

Meanwhile, on Friday, doctors in some parts of the country including Delhi’s AIIMS have come out in support of their striking colleagues in Bengal.

The India Medical Association has declared “All India Protest Day” on Friday against the incident and expressed solidarity with the striking doctors.

All out-patient clinics and routine services will remain suspended at New Delhi’s All India Institute of Medical Sciences (AIIMS) and the Safdarjung Hospital with over 3,500 resident doctors from the two hospitals striking work.

Officials said senior doctors will run the emergency department and the ICUs. The two hospitals see almost 20 thousand patients in their clinics, with 40% of them travelling from neighbouring states to seek treatment.

Resident doctors from Maharashtra, too, will join around 80,000 colleagues across the country in a one-day national strike on Friday.

Owing to the strike, government medical colleges in the states will have to put routine surgeries as well as services at academic, out-patient and in-patient departments on hold between 8am and 5pm.

A few protest processions are expected to be held in Kolkata.

On Thursday evening both the principal and medical super of NRS wrote to the director of medical education tendering their resignation.

While the opposition has attacked CM Banerjee over the impasse, with the BJP accusing her of acting as “Hitler”, the chief minister has called the strike a conspiracy by the CPI(M) and the BJP.

In a Facebook post, the chief minister highlighted the plight of patients in hospitals due to the ongoing strike and claimed the government was cooperating with doctors. She described the injuries sustained by the two junior doctors at NRS Medical College and Hospital as “unfortunate”.

Five persons have been arrested in connection with the incident, Banerjee said, adding that an inquiry has also been ordered to look into complaint of negligence during treatment, resulting in the death of the patient.