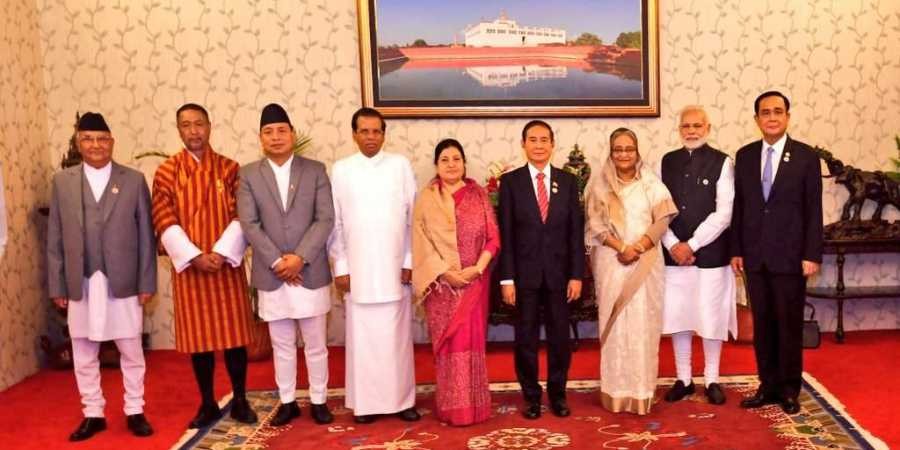 National leaders of the seven Bay of Bengal Initiative for Multi-Sectoral Technical and Economic Cooperation (BIMSTEC), countries are invited for the swearing-in ceremony of Prime Minister Narendra Modi on May 30 as per sources.

A statement issued on Sunday had said that the President will administer the oath of the office and secrecy to the Prime Minister and other members of the Union Council of Ministers at 7 pm on May 30, 2019, at Rashtrapati Bhavan.

However, for a second time, Bangladesh Prime Minister Sheikh Hasina will miss Modi's swearing-in as she will be on a three-nation foreign visit, officials in Dhaka said Monday.

Liberation War Affairs Minister AKM Mozammel Huq will attend the ceremony as the senior-most Cabinet member of the Bangladesh government.

Hasina will be on a tri-nation visit to Japan, Saudi Arabia and Finland beginning Tuesday.

She could not attend the previous swearing-in ceremony of Modi in 2014 as she was abroad then too.

The Bangladesh PM was one of the first foreign leaders to congratulate Modi following his thumping Lok Sabha election victory, reflecting the "extraordinarily close and cordial ties" between India and Bangladesh, and the excellent rapport that the two leaders enjoy.

She also spoke to Modi on Thursday and said this "emphatic verdict is a reflection of the trust and confidence reposed on you by the people of the world's largest democracy.

The BIMSTEC consists of countries that are dependent on Bay of Bengal, namely Bangladesh, India, Myanmar, Sri Lanka, Thailand, Nepal, and Bhutan. It was formed in June 1997 through the Bangkok Declaration. Its purpose is to serve as a bridge between South and South East Asia.

Along with BIMSTEC nation heads, the President of the Kyrgyz Republic, who is the current Chair of the Shanghai Cooperation Organization, and the Prime Minister of Mauritius, who was the Chief Guest at this year's Pravasi Bhartiya Divas, have also been invited.

In 2014 when Modi won his first term, all the SAARC leaders, including the then Pakistan Prime Minister Nawaz Sharif attended the swearing-in as part of invitations extended to all the member countries of the South Asian grouping.

But relations with Pakistan soured mid-term and hit its nadir after the Pulwama attack in February which was followed by India's aerial strikes on terror camps in Balakot in Pakistan.