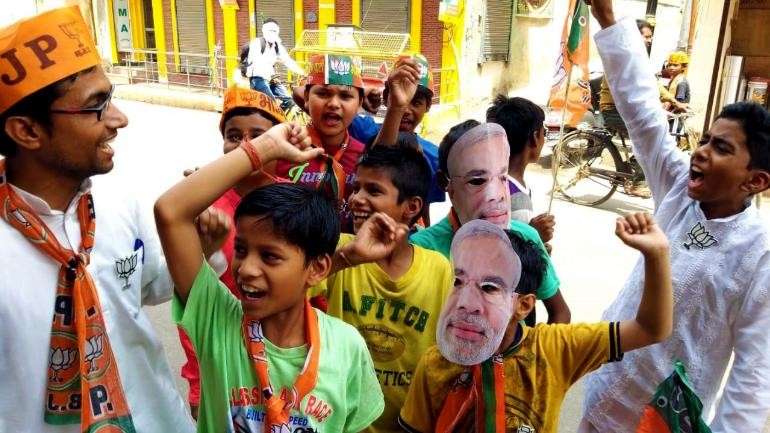 he mahagathbandhan in UP might give the BJP a run for its money in seven of the 12 seats it won in the state that are going to polls in the fifth phase on May 6. Apart from these 12 seats, Amethi and Raebareli will also go to polls on Monday.

If the 2014 voting trends are taken into consideration and if the votes of SP and BSP are added up, then the BJP would be behind in Bahraich, Mohanlalganj, Sitapur, Kaisarganj, Kaushambhi, Banda and Dhaurahra Lok Sabha seats

In Bahraich, the BJP had defeated SP by 95,590 votes in 2014. But if votes polled by the SP and BSP are added up, BJP candidate Akshaibar Lal would not be able to match up.

Coupled with this, sitting BJP MP Savitri Bai Phule recently quit the party and joined the Congress. She is now contesting on the hand symbol. SP has repeated Shabbir Ahmad Balmiki, this time as the mahagathbandhan candidate.The mahagathbandhan is also in an advantageous position in Mohanlalganj where sitting BJP MP Kaushal Kishore is seeking a second term. His main contestant is CL Verma from the BSP.

In the 2014 Lok Sabha polls, Kishore polled 4,55,274 votes against BSP's RK Chaudhary who received 3,09,858 votes. But after BSP's alliance with SP, difficult times lay ahead for the BJP.

In Kaushambi, BJP is facing a tough fight with SP. In 2014, BJP's Vinod Kumar Sonkar won this reserved seat with 4.72 per cent vote margin (42,900 votes). This time, Sonkar is up against Indrajeet Saroj of SP. If voters polled by BSP are added, the sitting MP faces a tough challenge to retain the seat.

Similarly, the BJP's road to victory seems patchy in Sitapur, Banda, Kaisarganj and Dhaurahra too. However, despite the SP-BSP alliance, the BJP is in a strong position in Lucknow, Gonda, Faizabad, Barabanki and Fatehpur, which are also going to polls on Monday.

Phase 5 of the Lok Sabha elections are crucial for the Congress too. Party president Rahul Gandhi and UPA chairperson Sonia Gandhi are contesting from Amethi and Raebareli respectively.The BJP is giving a tough fight to Rahul Gandhi in Amethi. While Gandhi had defeated BJP's Smriti Irani by 1,07,903 votes in 2014 (Irani is the BJP candidate this time too), the Congress lost significant base in the assembly and local body polls held in the constituency since. In 2014, Congress had polled 46.71 per cent votes whereas BJP pocketed 34.38 per cent votes.