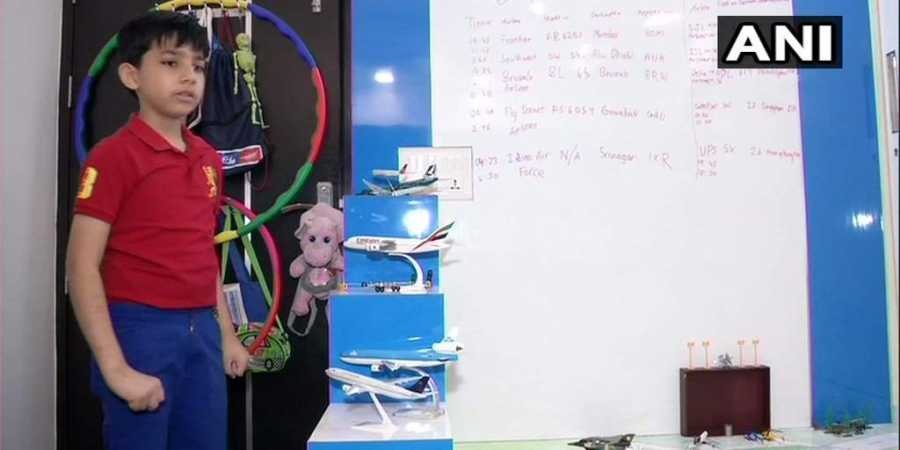 Nine-year-old Abeer Magoo has been presented with an opportunity to celebrate his 10th birthday at Delhi's Indira Gandhi International Airport after he received a special invite from the Airport CEO for making a model of the airport.

Magoo, a student of class five, has been invited for an airport tour on his 10th birthday on June 10 by Videh Kumar Jaipuriar, CEO of Delhi International Airport Ltd.

The young boy was given the opportunity after he made the replica of Delhi airport's terminal 1 by looking at a Google map image with exactly the same models of aircraft which are available at the airport. He has also developed a chart where he has written flight numbers and their departure and arrival timings.

Magoo remembers all flight numbers and aeroplane models by which he and his father have travelled so far. His picture went viral on Twitter when his uncle posted his picture and tagged Delhi airport. Their social media team contacted his parents through Twitter and invited him for the airport tour on his tenth birthday.

Speaking to ANI, an ecstatic Magoo said, "I am very excited about my birthday. It is going to be the best birthday. I will not leave any corner of Delhi airport unseen." The nine-year-old also shed light on how he developed his art form. "I was once travelling to Mumbai with my parents on a flight. It was then when I saw a pilot going inside the cabin. Also, I saw the cockpit from very close. I enjoyed that vision a lot and I was amazed at all the lights there. I started collecting miniatures of planes from then onwards."

Magoo revealed that he wants to become a captain pilot in the future. "I worked for 21 hours, taking breaks in between, to create this. I have models of airbuses and Boeing aircraft," he said.

Anurag Magoo, who travels a lot for business purposes, said his son has more than 150 aircraft in his collection. "He (Abeer) has around 150 to 200 aircraft in his collection. Whenever I go to different countries I bring aircraft for him. That's my only contribution to his passion and he does rest of the things by himself. I don't help him in making this. He doesn't demand anything else but aeroplanes," said Anurag.

Meanwhile, Abeer's mother Shweta Magoo said, "I am so proud of my son. All his teachers in school are calling me to congratulate. It is very exciting for me that Delhi airport has called us to celebrate his birthday. They were amazed to see such striking details in his creation."

Detailing further about her child's interest in the aviation sector, she said, "Although I travel a lot, I have no knowledge of details of aircraft and airports. He does everything by himself. Initially, we used to buy him toy aircraft but gradually I realised that there was something extraordinary in his love towards aircraft. Therefore every family member started buying him aircraft whenever we travelled. Although he plays with his friends in the park he loves to spend most of his time creating airport replicas."