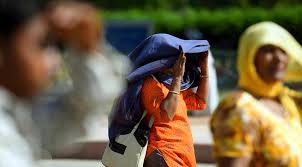 Heat wave is likely to grip the national Capital from Thursday as the mercury is expected to soar up to 45 degrees Celsius, said officials of the India Meteorological Department.

After a brief respite last week, the maximum temperature has started rising again. Thunder activity and light showers last week had brought much needed relief from the scorching heat. According to the officials, hot and dry westerly winds coming from Rajasthan reaching Delhi is the main factor behind the rise in temperatures.

“When the day temperature breaches normal mark by five or more degrees it is categorised as heat wave. The city is likely to have heat wave conditions from May 29 till at least June 2,” said a senior official of IMD’s regional weather forecasting centre.

A western disturbance that will reach Delhi by May 31 will have no effect on its hot weather, the official added.