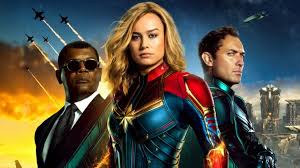 Late into Captain Marvel, the first-ever female-fronted superhero film from the Marvel Cinematic Universe (MCU), a series of sequences shows Carol Danvers physically falling and rising at different junctures in her life. Captain Marvel, MCU's 21st movie and the first co-directed by a woman, Anna Boden, plays largely by the rules of the genre, but it juggles with its narrative sequencing to mirror the unsteady state.

Both the actress and the two directors, newcomers to this scale and nature of moviemaking, are able to infuse the story of the creation of a new avenging angel with a degree of freshness, both in terms of substance and narrative approach. The film might appear a touch low-key, but that could well be the principal factor that sets it apart from most of the others that have gone before. Captain Marvel, set in the mid-1990s, is an origin story but it works also as a self-contained tale of a girl who discovers that she can fly and shoot photon blasts from her "supercharged hand".