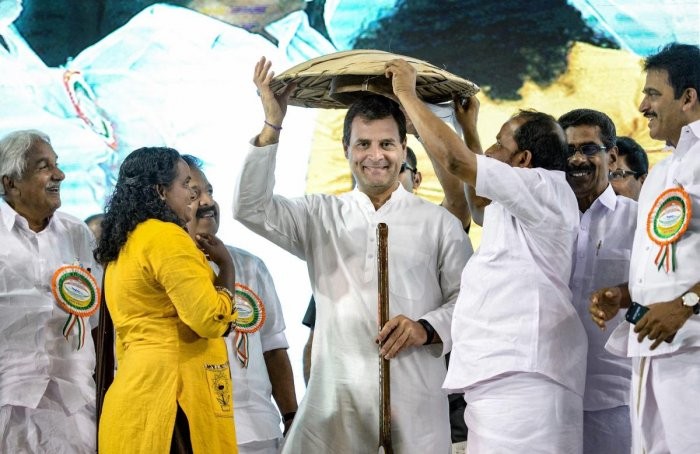 Putting an end to speculations, Congress on Sunday announced that Rahul Gandhi will be contesting from  Kerala's Wayanad constituency.

The Congress chief, who has already announced candidature from Amethi in Uttar Pradesh, will be contesting from Wayanad as his second seat. The announcement was made by senior party leader AK Antony at a press conference in New Delhi

"Rahul's candidature will create ripples in the political waters and it is assured that the people vote in hordes will ensure Rahul's win. He will win the election with a record majority," said AK Antony.

The decision was taken after discussions and though Rahul was not much keen on contesting, it was after much pressurising that he agreed to contest from Wayanad, senior Congress leaders have opined.

"It will set a new dimension for Kerala, with the Indian political milieu eagerly looking forward to Wayanad which will be the cynosure of all eyes," according to Opposition leader Ramesh Chennithala.

Speculations of the Gandhi scion's candidature from the southern state were doing the rounds for more than a week with senior Congress leader pitching for the same.

Kozhikode DCC president T Siddique, who was then considered the front-runner for the Wayanad seat, said he was ready to step aside for Rahul.

However, Congress Working Committee member PC Chacko threw a spanner into the dream works when he said Rahul contesting against the Left candidate in Wayanad will send a negative message at the national level and that it will create confusion in the Congress camp.

After multiple reports and rumours, Congress has put an end to the speculations with the announcement of Rahul candidature which will be seen as a huge boost for the party's fortunes in the southern states.

The Wayanad seat has been a Congress stronghold with late M I Shanavas representing the constituency for the past two terms. He had won the first term convincingly with a margin of over 1.5 lakhs. However, for his second term, Shanavas barely managed a win with a margin of 20,000 votes. The seat has been vacant since his death in November 2018.