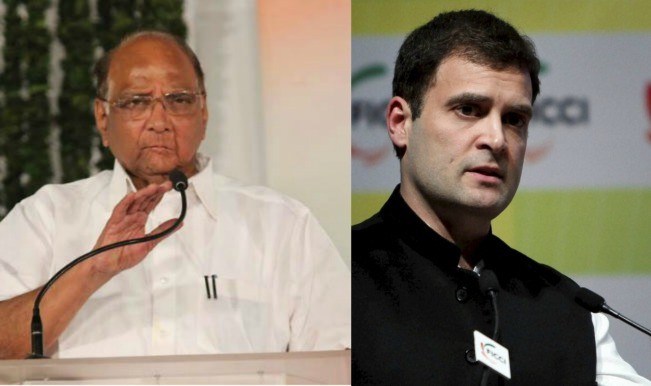 After avoiding most of his party leaders over the last two days, Congress president Rahul Gandhi Thursday drove to NCP chief Sharad Pawar’s residence in the Capital and spent nearly an hour, triggering talk of a possible merger between their parties.

Senior NCP leaders said their party is yet to discuss any such proposal. But while they asserted that the issue did not figure in the meeting between Pawar and Rahul, they acknowledged that the massive defeat suffered by both parties in the Lok Sabha elections would prompt them to explore all possibilities.

“Congress President Mr. @RahulGandhi met up with me today at my residence in Delhi. We discussed matters pertaining to the forthcoming Vidhan Sabha Elections and the drought situation in Maharashtra,” Pawar posted on Twitter.

Tariq Anwar, who recently joined the Congress from the NCP, said he had broached the subject of a possible merger with Pawar before he left the party. “Before leaving the NCP, I had told Pawar that it was time for the party to merge with the Congress. Pawar then told me he will talk to others,” he said. Anwar had walked out of the Congress along with Pawar and the late P A Sangma in May 1999, more than a year after Sonia Gandhi took over the party in March 1998, primarily over the issue of her foreign origin.

Sources said that on Thursday Pawar and Rahul analysed the Lok Sabha debacle. They said Pawar also urged Gandhi to reconsider his decision to quit as Congress chief.

The two parties, which fought the election in alliance, were routed with the BJP-Shiv Sena winning 41 out of the 48 seats in Maharashtra. While the NCP won four seats, the Congress was reduced to one. The two parties will now face Assembly elections.

Two days ago, state-level leaders from the two parties had met in Mumbai to review the reasons behind the defeat. “A merger was not discussed during this meeting,” said a Congress leader.

When contacted, Nawab Malik, NCP’s chief spokesperson, said, “Pawarsaheb has already said that such reports (of a merger) have no basis. Both parties will fight the state polls unitedly.” Rahul’s meeting with Kumaraswamy assumes significance since the Congress-JD(S) coalition government in Karnataka is facing a rebellion from a group of Congress MLAs. As many as seven MLAs skipped a meeting of the Congress legislature party in Bengaluru Wednesday. AICC general secretary in charge of Karnataka K C Venugopal is in Bengaluru to placate the leaders.

Kumaraswamy is also upset with recent statements made by loyalists of former chief minister and Congress leader Siddaramaiah pitching him for the post of the next CM.

“I called on AICC President @RahulGandhi today. We spoke about the current political scenario in the State and how the coalition govt is functioning smoothly with cooperation & coordination between both the parties. I appealed to Rahul Gandhi to not quit the AICC president position,” Kumaraswamy tweeted.

The Congress-JD(S) alliance was routed in Karnataka with both the parties managing to win only one seat each. The BJP won 25 of the 28 seats. Meanwhile, with Rahul remaining firm on his decision to step down, party leaders have begun discussing possible options and potential names for the post of Congress president. Senior leader Ahmed Patel met Mallikarjun Kharge and former Madhya Pradesh chief minister Digvijaya Singh to discuss the situation.