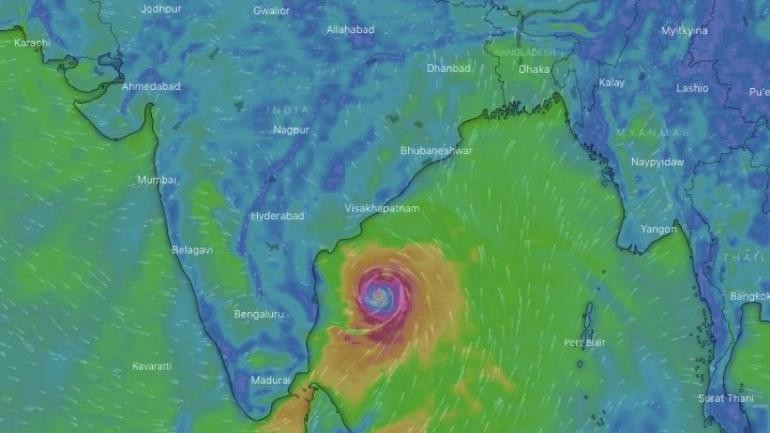 The cyclonic disturbance is moving northwestward at a speed of 21 kilometres per hour. Cyclone Fani will likely make way 300kms away from the Chennai coast, before heading north. It is eventually expected to recurve and move in the north-northeast direction post-Wednesday.

"The cyclone threat for Tamil Nadu and Puducherry has subsided with the cyclone Fani keeping away from anywhere near the shores," said Indian Meteorological Department bulletin.

Prime Minister Narendra Modi, too, sounded an alarm and prayed for everyone's safety.

While Cyclone Fani will not make landfall in Tamil Nadu, but it may bring light rain in the region.

Kerala is expected to get light to moderate rain at many places today and tomorrow and heavy rain in isolated pockets. A few places in north coastal Tamil Nadu and south coastal Andhra Pradesh are predicted to have light to moderate showers for the next two days.

The Regional Meteorological Centre in Chennai said cyclone threat to Tamil Nadu has abated. "There is no chance of Fani crossing the Tamil Nadu coast," Director of Area Cyclone Warning Centre S Balachandran told reporters in Chennai on Sunday.

Fishermen have been asked not to venture into the deep sea in South East Bay and the adjoining equatorial Indian Ocean.

The IMD has advised fishermen along the coasts of Sri Lanka, Tamil Nadu, Andhra Pradesh, Puducherry not to venture into the sea.

Those in the deep sea were advised to return to the coast, the IMD added.

With the threat from the cyclonic storm subsiding, scanty rainfall in some regions may provide no respite from the soaring temperatures in the region.

Many weather expert have pointed out that similar cyclonic storms in the past that have recurved have left the atmosphere high and dry, resulting in the temperature rising after they pass.

The recurving of the storm may lead to a heat wave in coastal regions of Tamil Nadu.