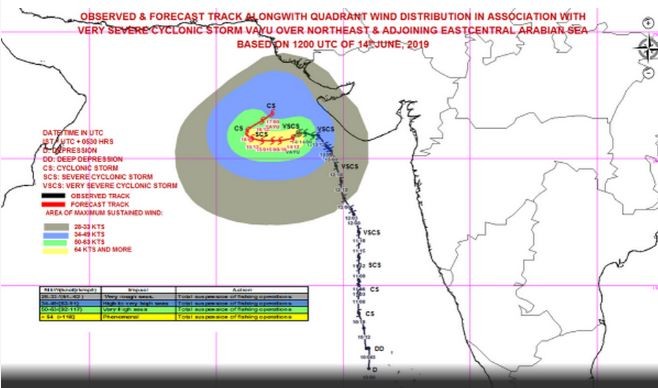 A top Union Ministry of Earth Sciences official on June 14 said Cyclone Vayu is likely to recurve and hit Kutch on June 17-18, hours after Gujarat Chief Minister Vijay Rupani announced that the storm posed no threat to the State as it had moved westward.

Cyclone Vayu was to hit the Gujarat coast on June 13, but it changed course on the intervening night of June 12 and 13. It skirted the Gujarat coast, affecting Gir, Somnath, Diu, Junagarh and Porbandar.

“Vayu is likely to recurve on June 16 and hit Kutch on June 17-18,” M. Rajeevan, Secretary of the Ministry of Earth Sciences, told PTI. The intensity of the very severe cyclonic storm is also likely to reduce, Mr. Rajeevan said, adding that it may hit the coast as a cyclonic storm or a deep depression. He said the Gujarat government has been alerted about the possible recurvature of the cyclonic storm.

Speaking on the IMD’s latest weather report, Ahmedabad Meteorological Centre Additional Director Manorama Mohanty, however, said it was too early to predict if the cyclone will recurve and hit Kutch or Saurashtra. “The report says it may recurve in the next 48 hours. But it is also possible it may weaken by then and dissipate in the sea itself. Thus, it is too early to predict that it will come back and hit the Kutch coast,” she said.

Gujarat Chief Secretary J.N. Singh said authorities were keeping a watch on the situation and NDRF teams would continue to be stationed along the coastline for the next 48 hours.

“Even if it comes back to Kutch or Saurashtra after 48 hours, the system may have weakened significantly. However, we are alert. If something happens on June 17 and 18, we’re ready for that. NDRF teams are also there for the next 48 hours. We have not called them back,” he said.

Earlier in the day, after a meeting with officials in Gandhinagar, Mr. Rupani said, “Gujarat is now completely safe. There exists no threat from cyclone Vayu now as the storm has veered towards the west in the Arabian Sea.”

“Around 2.75 lakh people, who were evacuated from the coastal areas, are free to return to their homes,” the Chief Minister told reporters, adding that the state government would pay a total allowance of around ₹5.5 crore to the evacuees for daily expenses over the next three days.

“Schools and colleges will start tomorrow. We are also calling back senior officials and ministers, who were deployed in 10 coastal districts to supervise relief and rescue operations. Road transport buses have started plying in these areas today,” Mr. Rupani said.

The cyclone, while not making landfall in Gujarat, brought moderate-to-heavy rains to 114 tehsils, the highest rainfall of 6.5 inches (160mm) being recorded in Talala tehsil of Gir-Somnath district since Thursday, a Met department release said.