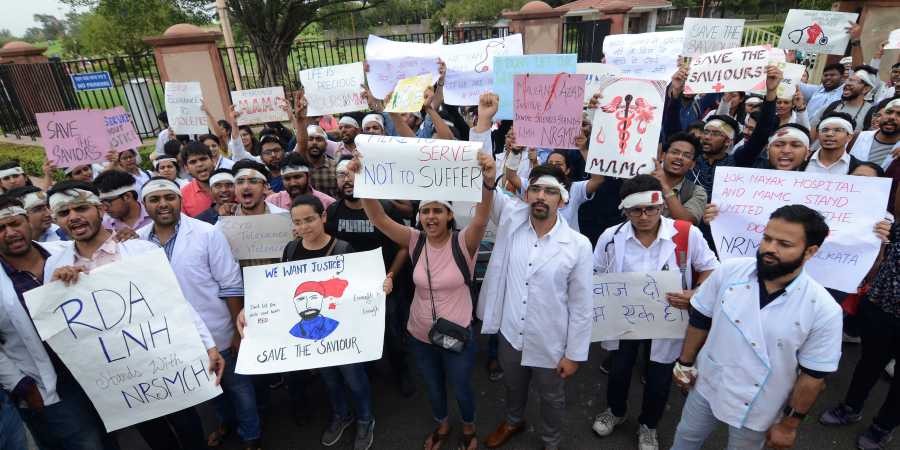 The All India Institute of Medical Sciences, Delhi government-run hospitals and Delhi Medical Association has called off their strike after NRS medical college in Kolkata ended the protest.

More than 10,000 doctors and 24 hospitals were protesting in the national capital in solidarity with the recent violence in West Bengal.

“We are calling off strike and will resume back to work from Tuesday onwards. Although we are yet to receive the final written statement from the West Bengal, but the resident doctors will join routine OPDs and surgeries,” Dr Amrinder Singh Malhi, President, RDA AIIMS told the Morning Standard.

The Federation of Resident Doctors Association had called for the withdrawal of OPDs, surgery and non-essential services on Monday which was joined by around 10,000 resident doctors and 22 different hospitals. Forda President Dr Sumedh Sandanshiv stated that Delhi government hospitals will resume back normal work.

“This is just an initial movement; the WB government’s decision is welcomed but not an end to our protest. We will resume back to routine work atmosphere from tomorrow but will continue to raise voice through meetings with ministers and other officials. Doctors also need protection,” said Dr Sumit Kumar from GTB hospital.

Earlier the day, AIIMS had organized a protest march in the morning and later called for a strike till Tuesday morning against the assault on a junior resident at Emergency Department, Trauma Centre.

While the AIIMS administration had registered a case, RDA continued the protest saying it was like a ‘warfront situation’.

“How can we give our 100 % if the doctors are constantly under threat. We fear of getting hit, physically abused any moment, there is no protection of us. We don’t want the patients to be affected therefore we completed the OPD and cleared Friday backlog and then began our protest,” said Rajeev Ranjan, General Secretary, AIIMS RDA.

The strike saw affecting many patients, especially those who came from neighbouring states to Delhi for treatment.