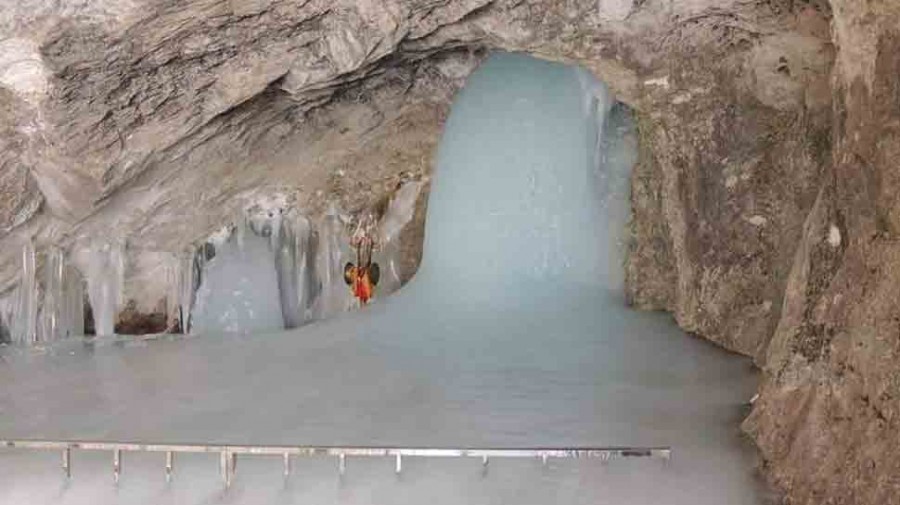 The Amarnath Yatra attracts lakhs of pilgrims every year who visit the site during Shravani Mela in July-August, only time in the year when the cave accessible. The annual yatra is still two months away, some devotees have claimed to have visited the holy shrine in the fourth week of April. The devotees, who claim that they are the first to take the Amarnath Yatra, group of at least eight people visited April 20-25.

According to the pilgrims, the size of 'Shivling' is giant even this year and that there is still 10-15 feet high snow present on the way to the cave. They also shared some exclusive pictures of the cave, which are believed to have taken four days back.

The devotees, who claim that they are the first to take the Amarnath Yatra this year, said that a group of at least eight people visited the shrine from April 20-25.

It is to be noted that officials of Shri Amarnathji Shrine Board (SASB), which manages the yatra, are yet to visit the cave. Also, no official confirmation has been given on the yatra taken by these devotees.

The 46-day yatra is scheduled to begin on twin routes - traditional Pahalgam track in Anantnag district and the shorter Baltal track in Ganderbal district - on July 1, the day of 'Masik Shivratri'. It will conclude on August 15, the day of 'Shravan Purnima' and 'Raksha Bandhan'.

The registration for the yatra commenced on April 2 through 440 designated branches of the Punjab National Bank, the Jammu and Kashmir Bank and the YES Bank, located in 32 states and union territories.

The SASB has approved a proposal for online registration of a limited number of intending pilgrims each day on a pilot basis. The board had decided that 7,500 Yatris per day on each route, excluding pilgrims travelling by helicopters, would be allowed to register in advance for the pilgrimage.

They said children under the age of 13 years and those above 75 years of age and women who are more than six weeks pregnant will not be registered for the yatra.

The officials have directed the intending pilgrims to consider the difficult climate and terrain in the high altitude region of the yatra and prepare themselves before embarking on the pilgrimage.