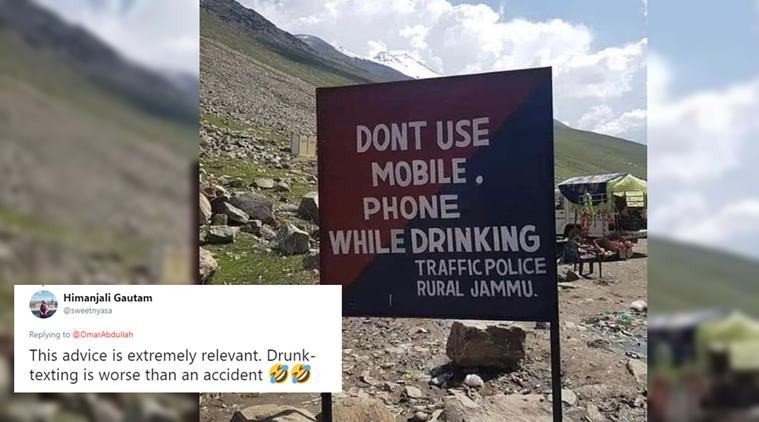 While it’s not unusual for the traffic police to put up signs to spread awareness on road safety, one sign in Jammu and Kashmir has left people in splits. “DON’T USE MOBILE PHONE WHILE DRINKING”, reads a bizarre signboard by the Traffic Police of Rural Jammu at Peer Ki Gali on Mughal Road, and quite naturally, everyone online is talking about it.

As the photo garnered attention online, authorities issued a clarification and ordered an inquiry into it. “This unit has installed a signboard at Peer Ki Gali on Mughal Road recently with the nomenclature that ‘Don’t use mobile phone while driving’ in order to ensure general awareness among the concerned drivers,” the statement read.

“However, it has been brought into the notice of undersigned that some disgruntled elements have changed the aforesaid signboard with the nomenclature that “Don’t use a mobile phone while drinking”, which is a matter of serious concern and requires to be enquired thoroughly,” it added.

“You’ve had the advice to not drink and drive and the advice to not use your mobile phone while driving. Here’s a new piece of advice,” former J&K chief minister Omar Abdullah earlier this tweeted. His post led to some hilarious reactions online with punny jokes and memes.

The gaffe started a laughing riot online as some quipped, “Okay. But 99% do use phones after drinking. Impossible to stop them afterwards.” Another remarked it wasn’t an error but sound advice, “Drunk tweets and texts are a thing. That is sound advice”.

The enquiry officer has been tasked with submitting a report on the matter for further course of action, the police added.