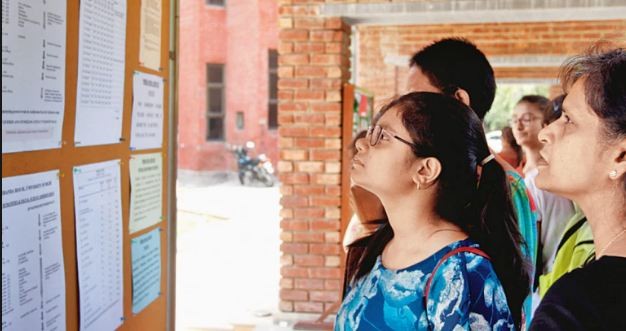 The Delhi University (DU) for the first time has released a separate subject-wise combination cut-off list for BA programme courses offered at around 50 colleges. A member of the admissions committee said there were around 170 different combinations available.

Last year, at 98.75% in Lady Shri Ram (LSR) College, the BA (prog) had the highest cut-off among all undergraduate courses. The course, which has gained immense popularity over the years, saw over 1.25 lakh applicants this year.

In the BA programme course, students have to choose two discipline papers that cannot be changed during the course of three years. The students must pursue the same combination in all the three years. In this course, students can study subjects like economics, geography, psychology and mathematics together.

Explaining the criteria of deciding the combination, Bijayalalaxmi Nanda, principal of Miranda House, said, “We divided the course cut-offs in three clusters of combinations (Humanities, Commerce and Science) so that students from all backgrounds can take admission. On the first day itself, we saw many candidates who came for admission under popular combinations like History-Political Science and Economics-Political Science.”

Teachers attributed the increase in the course’s rising popularity over the years to lack of a lengthy course structure which allows students to make time for competitive examinations, sports and extracurricular activities. In Honours courses, on the other hand, the syllabus is lengthy, in-depth and focuses only on one subject.

When asked about the decision to have differential cutoffs this year, a senior DU official said it was to check lateral movement of students between different combinations in colleges. “Sometimes, colleges admitted students with a specific combination and then the students changed the combination within those colleges,” the official said.

“The programme is easier and even the fee is comparatively lesser,” added Santosh Kumar, the admissions convener for Aditi Mahavidyalaya College which offers the highest number of seats (592) for BA programme.

Rama Sharma, principal of Hansraj College which offers five combinations in BA programme, said the college analysed the data of the past five years to decide cut-offs. The History-Economics combination had the highest cut-off in the BA programme combination in the college, he said.