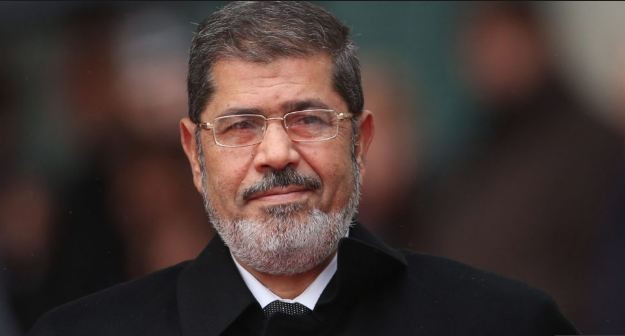 A preliminary medical assessment found that Morsi, 67, showed signs of a possible heart attack or stroke, according to authorities and local media reports. He had been imprisoned since 2013, when his elected government was overthrown in a military coup led by the country's then-military leader, Gen. Abdel Fattah el-Sissi, who is now president.

As news of his death spread, a chorus of Morsi's backers, allies and watchdog groups raised questions about his treatment in prison. The former president was known to have been suffering from several ailments, including diabetes and liver disease.

A panel of British politicians and lawyers concluded last year that Morsi had received "inadequate medical care" and found that the conditions of detention could meet the threshold for "torture."

"We feared that if Dr. Morsi was not provided with urgent medical assistance, the damage to his health may be permanent and possibly terminal," Crispin Blunt, a British lawmaker who chaired the panel, said in a statement Monday. "Sadly, we have been proved right."

Blunt called for an independent international investigation into Morsi's death, as did Morsi's Muslim Brotherhood movement, which called his death a "murder." Human Rights Watch and Amnesty International also pressed Egypt's government to conduct an impartial and transparent probe.

Egyptian authorities were not immediately available for comment. The country's public prosecutor, Nabil Ahmad Sadiq, said in a statement that Morsi "fainted and fell to the ground" after speaking for five minutes during his trial. He was taken to a hospital, where he was pronounced dead, Sadiq said.

A "superficial medical examination had found no blood pressure or pulse or breathing," Sadiq added, saying that Morsi's pupils were dilated and not responsive to light and that he was dead on arrival at the hospital at 4.50 p.m.

"There were no visible, recent external injuries on the body of the deceased," the prosecutor said, adding that a report is being prepared on the cause of Morsi's death.

Morsi, who was 67, had been in custody since he was ousted by the military in 2013 after mass protests.

Morsi, a top leader of Egypt's Muslim Brotherhood, was elected in 2012 after the nation's Arab Spring revolts that toppled President Hosni Mubarak. Following the military takeover, Morsi was convicted in trials that were denounced as politically motivated by his supporters, Western diplomats and human rights activists.

For the past six years, he has remained largely in solitary confinement.

On Monday, he was in court to face trial on charges that included espionage and inciting violence.

After el-Sissi was elected president in 2014, he began dismantling the Muslim Brotherhood, banning the party and arresting tens of thousands of the movement's members and supporters.

Morsi's 2012 election victory, in Egypt's first fairly-contested presidential vote, elevated an unlikely candidate to lofty heights at a critical moment in Egypt's history. Morsi, an American-trained engineer, was a Brotherhood functionary who became the movement's candidate only after a more charismatic leader was disqualified.

But despite his lack of obvious gifts, Morsi had the benefit of facing an opponent considered by many voters to be a remnant of the Mubarak era. He was also able to lean on the powerful grass-roots network of the Brotherhood, the Sunni religious, political and social movement founded in Egypt in 1928 that served as a wellspring for Islamist movements around the Arab world.

For many Egyptians, his election represented hope that democracy, an aspiration of the country's uprising, would take root in the country after decades of military-backed rule.

Although he promised an inclusive leadership, Morsi's government was accused of sidelining non-Islamist political forces and mismanaging the economy. Protests erupted after Morsi issued a decree granting himself vast powers that would enable him to push through a new constitution. Morsi's allies claimed the powers were necessary, to battle powerful, anti-democratic forces entrenched in the deep state.

By the end of 2012, tensions were at boiling point amid clashes between Morsi's supporters and opponents divided over his leadership. Protesters accused Morsi of becoming an authoritarian and betraying the hopes of the revolution.

The turmoil prompted el-Sissi, then chief of the armed forces, to warn that the political crisis could lead to the collapse of the government.

In June 2013, huge crowds turned out throughout the country, calling for Morsi to step down and demanding new presidential elections. In a speech to mark his first anniversary as president, Morsi vowed to correct his "mistakes."

The military warned him publicly to meet the people's demands, prompting Morsi to declare, also publicly, that he was Egypt's legitimately elected leader.

Days after another massive street demonstration, the military seized power, suspending the constitution and announcing the formation of an interim government. Morsi was taken by soldiers to an undisclosed location.

During the six years he was in prison, Morsi all but vanished, rendered invisible to the public, apart from his occasional court appearances, and denied frequent visits with his family, according to human rights groups. He was held in a detention facility near Egypt's Mediterranean coast for a time and at some point was transferred to Cairo's notorious Tora Prison.

Amr Magdi, a Middle East and North Africa researcher at Human Rights Watch, said that Morsi received three family visits during his imprisonment. Each visit was attended by members of the security services, who on at least one occasion took notes on everything that was said, according to Magdi.

Morsi's relatives described him as appearing totally cut off from the outside world - unaware of major news events, even those that occurred in Egypt. "He didn't have newspapers - no pen, no paper, no books," Magdi said. It did not seem to them that Morsi even had a bed, he added.

The former president complained to judges at his court hearings that he was not receiving sufficient medical care, but there was no indication the judges took any action, Magdi said.

"We can definitely say that Egyptian authorities on the highest level are complicit in the situation he was put in - the isolation from the outside world, the lack of medical care," Magdi said. Whether those conditions resulted in his death "should be the result of an international investigation," he added.

On Monday, a Muslim Brotherhood spokesman described Morsi's death as "a full-fledged crime of murder" on the group's website with the hashtag #TheyKilledHim.

"The case is not and will never be accepted easily," said the spokesman Abbas Qabary, adding that the group's members plan to hold vigils around the world to mourn Morsi.

Amr Darrag, who served in Morsi's government and now lives in exile in Istanbul, also called for an international investigation and accused the Egyptian government of killing Morsi.

"It's not just medical negligence," he said. "It's not every day that a president dies this way, and there is a very big suspicion that needs to be properly dealt with."