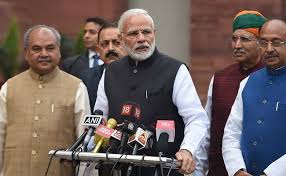 Prime Minister Narendra Modi and Uttar Pradesh's grand alliance or mahagathbandhan leaders Akhilesh Yadav and Mayawati will today face off in a place close to Ayodhya, the temple town part of the Lok Sabha seat that has been the centre of the Ram Janmabhoomi-Babri Masjid dispute. PM Modi's rally is scheduled at noon in the Maya Bazaar. Maya Bazaar falls under the neighbouring Ambedkar Nagar parliamentary.

This is the first time since coming to power in 2014 that PM Modi would visit the area - a move that's expected to fuel the claims of right-wing groups and allies like the Shiv Sena that the BJP uses the temple issue to draw votes.

PM Modi's rally is scheduled at noon in the Maya Bazaar - just 25 km from the site of disputed site of the 16th-century mosque in Ayodhya that was razed in 1992 by Hindu activists who believe that it stood on the site of a temple that marked the birthplace of the Lord Ram.

But for the national election, Maya Bazaar falls under the neighbouring Ambedkar Nagar parliamentary seat and not the Faizabad seat

Last year, Uttar Pradesh Chief Minister Yogi Adityanath had changed the name of Faizabad district to Ayodhya, but the name of the Lok Sabha seat has not been changed. Candidates from both theSamajwadi Party's Akhilesh Yadav and Bahujan Samaj Party chief Mayawati are holding their joint rally at Ram Snehi Ghat, a location that is on the border of Uttar Pradesh's Barabanki and Ayodhya districts and 70 km from the temple town.

It is not clear if the location of the rally has been chosen deliberately or if it was a random choice, because the opposition does not want the mandir-masjid (temple-mosque) issue to dominate political discourse.

The alliance candidates for Barabanki, Faizabad and Bahraich Lok Sabha seats will attend the rally.

In the 2014 national election, the Faizabad seat was won by the BJP's Lallu Singh with a margin of over 2.5 lakh votes. But in the 2009 election, Nirmal Khatri of the Congress had won. This time, the seat is seeing a triangular fight between Lallu Singh, Nirmal Khatri and Anandsen Yadav of the Samajwadi Party. Mr Yadav is the son of a former lawmaker from the area but carries the image of being a strongman.