Business / Ericsson may have to refund Rs 550 cr to RCom if insolvency proceedings revived: NCLAT 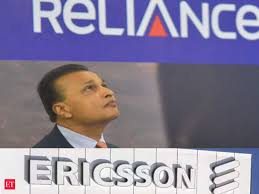 In February, the Anil Ambani-owned telco had approached the National Company Law Appellate Tribunal (NCLAT) to withdraw the appeal it had filed last year for a stay on an insolvency petition against the telco admitted by the National Company Law Tribunal (NCLT). NCLAT, on May 30, 2018, stayed the proceedings, subject to RComNSE -4.69 % paying Ericsson Rs 550 crore as a settlement amount.

He noted that assets of RCom, weighed down by Rs 46,000 crore in debt, had not been sold in accordance with the terms of the agreement under which the insolvency proceedings were stayed. RCom was forced to scrap its wireless assets sale to Reliance Jio, owned by Anil’s elder brother Mukesh, following successive legal obstacles.

“We should dismiss this appeal and let the ‘insolvency’ proceedings go on,” the bench said.

The observations of the NCLAT bench, which will next hear th ..