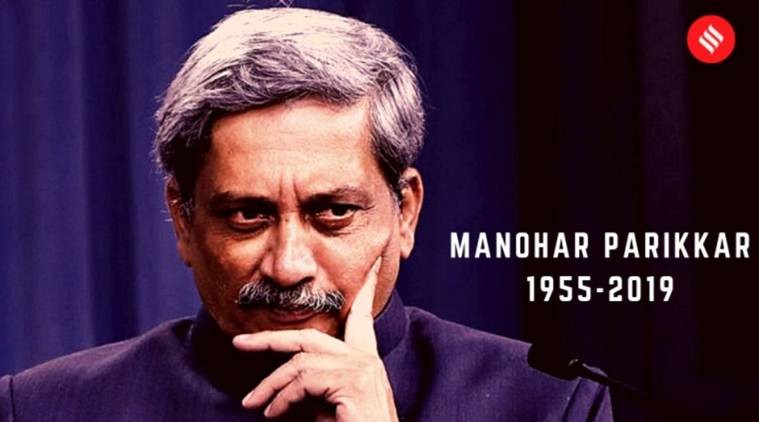 Manohar Parrikar health LIVE News Updates: Chief Minister Manohar Parrikar passed away Sunday after a prolonged illness. Parrikar was suffering from a pancreatic ailment and had undergone treatment in the US as well as at AIIMS Delhi and a private hospital in Mumbai.

In a press conference earlier today, the Goa Congress reiterated that it has the numbers to form the government in the state and accused the governor Mridula Sinha of behaving like ‘a BJP office-bearer’.

Meanwhile, former Chief Minister and Congress MLA Digambar Kamat denied reports of him joining BJP, calling it ‘totally baseless and not true’. Kamat told The Indian Express, “Since morning I am being chased. Till today I have not met anybody. Today also, I have finished my work in Delhi. I have not met anyone neither in BJP nor in Congress… But I am with the Congress and will be attending the CLP. Last month too someone did this. These news item floating from other side are totally baseless and not true.”

The BJP leaders today met to discuss the succession plan and the political situation in Goa amidst the deteriorating health of CM Parrikar. Post the BJP’s meeting, sources confirmed to The Indian Express that the MLAs were taken into confidence on Digambar Kamat joining the party and that he is in strong contention to the top post. Kamat also enjoys the confidence of Goa Forward Leader Vijai Sardesai. Rumors of him joining the BJP began after he was spotted at the Goa airport today morning.

On Saturday, the Congress staked claim to form the government in Goa. The party, in a letter, asked Governor Mridula Sinha to “dismiss” the BJP-led government which it said was in a minority. “We were the largest party on the day of the elections and we asked to be invited. We are again asking what is our right,” the letter read.