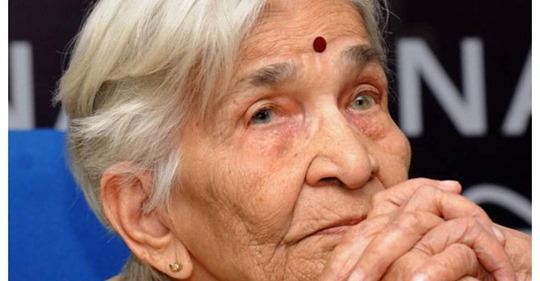 Renowned filmmaker and film historian Vijaya Mulay passed away on Sunday. Born on May 16, 1921, Mulay founded the Delhi Film Society in 1959, and later on became a joint secretary of the Federation of Film Societies.

Vijaya Mulay’s daughter, actor Suhasini Mulay said, “It was just about old age. She was 98. She had no illnesses of an ageing person. Her blood pressure was fine. Her heartbeat was fine. She didn’t have diabetes or anything like that. But as she grew older, she became weaker and was eating less. She called me on the morning of May 10 and told me that she was not feeling well at all. We took her to Escorts hospital, where she was admitted for four days.

She had made it very clear that she did not want anything invasive done to her. She said that she lived a full and happy life and did not want to be kept alive by a ventilator or anything. Then we brought her home on May 14, and she was with us till May 19. At 4.45 pm, she passed away. She was not in pain, and it was an easy passage.

The last rites will take place at 10 am today at Lodhi Road, New Delhi.”

Vijaya Mulay was not only a film historian but a respected educationist and an influential writer. Her friendship with film personalities like Satyajit Ray and Mrinal Sen is said to have heavily influenced her career.

Mulay also worked with Central Board of Film Certification in the early 1960s. French filmmaker Louis Malle and Satyajit Ray helped Mulay in making her first film called The Tidal Bore. The movie was even selected by the government for Manheim Film Festival.

In 1975, Mulay was asked to head the Center for Educational technology in order to prepare educational films which were to be broadcast in four languages across 2400 villages.

In 2002, Vijaya Mulay was honoured with the prestigious V Shantaram Award for her work in documentary filmmaking. Her film Ek Anek Aur Ekta won the National Film Award for Best Educational Film.