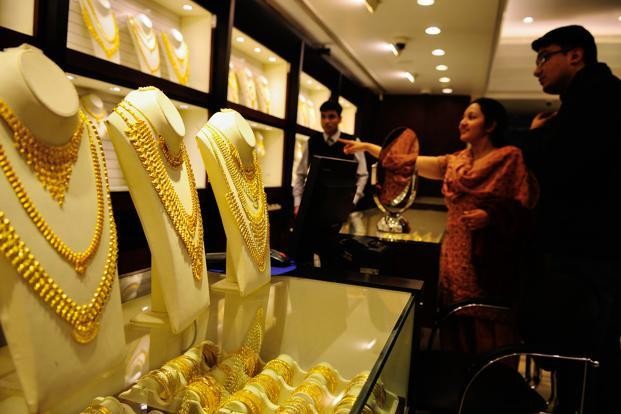 Gold prices today hovered near the four-month low hit in the previous session, after the US Federal Reserve dampened expectations of a rate cut in the near term, boosting the dollar and setting the bullion on course for a weekly drop. A stronger dollar makes gold costlier for holders of other currencies.

On Wednesday, Fed Chair Jerome Powell said inflation risks flagged during the release of the US GDP data were only based on transitory factors, and that there was no obligation to readjust interest rates any time soon.

"An unwinding of excessively bullish positioning for a dovish Fed has put a hammer on gold," said Jeffrey Halley, a senior market analyst with OANDA."What we are now seeing is a little bit of consolidation after a really big drop overnight."

The Fed decision lifted US Treasury yields to a one-week high, while the dollar looked set to end the week on a firmer note as markets scaled back bets on a U.S. rate cut.

The greenback has edged higher since Powell played down the recent slowing in inflation and saw no reason to cut interest rates.

"The dollar will continue to strengthen and (10-year) treasury yields are still going to hover around higher levels. We haven't seen anything from U.S. data that suggests a slowdown there, so gold is going to be under pressure in the near term," Halley added.

However, while major hubs - China and Japan - remain shut for holidays, Asian shares at large were subdued, restraining a further downward slide for the gold market, analysts said."From a technical point of view, there is a first support level (for gold) at $1,266, while the previous support levels of $1,280 and 1,288 now represent a resistance area for prices," ActiveTrades chief analyst Carlo Alberto De Casa said in a note from Thursday.

Silver was unchanged at $14.63 per ounce, holding close to a more than four-month low of $14.52 touched in the previous session.