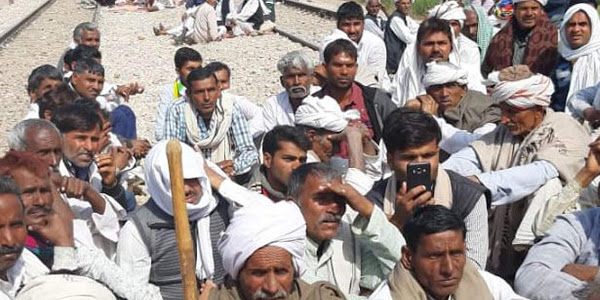 Earlier in the day, Gujjar community members blocked National Highway-11, which connects Jaipur with Agra, in Rajasthan’s Dausa district. They are demanding 5 per cent reservation in government jobs and educational institutions.

The protests had turned violent yesterday when shots were fired and police vehicles were torched in Dholpur district, forcing authorities to impose prohibitory orders under CrPc section 144 in Dholpur and Karauli districts. It still remains in force in the areas.

The agitation spread to various districts, including Dholpur, Bundi, Karauli, and Jhunjhunu, among others.

Protesters had blocked the road and clashed with police in Dholpur. According to police, some also allegedly fired nearly a dozen rounds in the air. The mob, numbering a few hundred, pelted stones and also set three police vehicles, including a bus, on fire. However, there were no reports of any injuries.