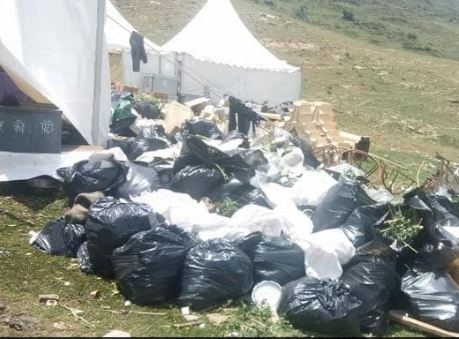 The South Africa-based Gupta family has deposited a user charge of Rs. 54,000 with the municipal corporation of Auli town in Uttarakhand to clean up the waste left after their Rs. 200 crore weddings.

They have also agreed to pay the entire cost of cleaning up after their mega wedding functions left Auli with major waste management problems.

"The Gupta family had deposited Rs. 54,000 as user charge. Over 150 quintal waste has been cleaned up till now. After the cleaning work is complete the total bill of all the expenses, including manual labour and vehicles, will be sent to them. The family has agreed to pay the entire bill and also provide a vehicle to the civic body," said the municipality president Shailendra Panwar.

The municipal corporation has deployed 20 workers to clear the waste lying around in the area.

The High Court has instructed the district administration and Pollution Control Board to submit a report by July 7 on the harm caused to the environment due to the waste. The next hearing in the matter is on July 8.

Ramdev had also conducted a two-hour yoga session at the wedding.

Choppers were hired to ferry the guests.

Almost all the hotels and resorts were booked and flowers were imported from Switzerland for the two high-profile marriages.

The wedding celebrations of Suryakant, son of Ajay Gupta, took place in Auli from June 18 to 20, while the marriage of Atul Gupta's son Shashank was held from June 20 to 22.