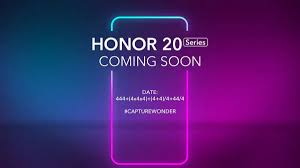 Huawei’s sub-brand Honor is gearing up to launch a global launch event on May 21 in London, which is today. The Honor 20 and Honor 20 Pro will be the new mid-range flagship phones with the Pro variant expected to sport a quad or four camera set up at the back. Both phones will take on the likes of OnePlus 7 and OnePlus 7 Pro as well as the Zenfone 6.

The event kicks off on Tuesday, May 21 at 2:00 pm London Time, or 6:30 pm IST. We will be live on the ground covering everything Honor announces at the event. You can also watch Honor’s official livestream as it starts at 2:00PM London Time/6:30PM IST.

As we said above, you can catch the live global launch of Honor 20 series through the company’s official YouTube channel. Or just stay here and watch the event fold above, as we’ve added the official livestream to this post. Our live blog will kick off an hour before the launch event and we will bring you news updates, photos and commentary.

Just like the OnePlus 7 and OnePlus 7 Pro, Honor is releasing two versions of its flagship devices: Honor 20 and Honor 20 Pro. The first is the Honor 20, expected to offer a 6.26-inch FHD+ IPS LCD display, a punch-hole cutout for a selfie camera instead of a notch, a side mounted fingerprint scanner, Huawei’s 7mm Kirin 980 processor, up to a 3750mAh battery with 22.5W fast charging and Magic UI 2.1 ( based on Android 9.0 Pie).

Perhaps the highlight of the Honor 20 will be a quad-camera setup, but it’s not known whether the camera configurations will be same as the Pro variant. The selfie camera on the Honor 20 might get a resolution boost to 32MP from the 24MP on the Honor 10.

Rumours claim the Honor 20 will sport 128GB of internal memory and 6GB of RAM. In terms of design and aesthetics, the phone will rock a glass sandwich design – that means it will have glass front and back panels and a metal frame in between them.

Leaked images suggest the Honor 20 Pro will have a single hole punch on the front to accommodate a 32MP selfie camera. The phone will be made from metal and glass, but this glass back is made using “Triple 3D Mesh” technology. Surprisingly, the company is using a side-mounted fingerprint scanner (similar to the one seen on the Galaxy S10e) instead of an in-display fingerprint scanner which is a bit weird.A quad-camera setup will help the Honor 20 Pro a slight edge over the OnePlus 7 Pro. The setup will reportedly consist of a 48MP f/1.4 main camera utilising Sony’s flagship IMX586 image sensor with OIS, an 8MP f/2.4 telephoto lens with 3x optical zoom, 5x hybrid zoom and 30x optical zoom,  a 16MP f/2.2 ultra-wide camera and a 2MP f/2.4 macro lens. If the leaks are correct, the Honor 20 Pro will have the largest ever aperture on a smartphone camera.

Other features of the Honor 20 Pro include a 4,000mAh battery with 22.5W SuperCharge tech, a Kirin 980 processor, 8GB RAM, 256GB storage, and MagicUI 2.1 (based on Android Pie). The phone will reportedly be made available in two colour options: Phantom Black and Phantom Blue.

Though we expect Honor’s May 21 event will primarily focus on the Honor 20 series, the company could also announce the Honor 20i at the same event. The phone was launched in March and is already available for purchase in China. The device sports a 6.21-inch FHD+ display, a Kirin 710 processor, a triple-camera setup and Android 9.0 Pie-based EMUI 9.