News / Huawei considers rivals to Google’s Android after US ban 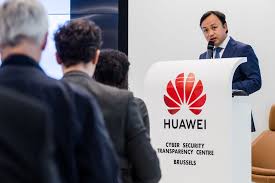 Huawei Technologies Co. said it’s working on its own operating system for its mobile handsets and will consider rivals to Google’s Android, after the US blacklisted the company, threatening its partnerships with chip, component and software suppliers.

The Chinese telecom equipment giant said Tuesday it was in talks with the Alphabet Inc. unit about how to proceed after Google confirmed it would cut access to some of Huawei’s operating system features for the company’s new devices in response to the announcement.

Should Google’s system no longer be available, ‘then the alternative option will naturally come out -- either from Huawei or someone else,’ Abraham Liu, Huawei’s representative to the European Union institutions, said at an event in Brussels on Tuesday.

Liu said Huawei had been working on its own operating system but that he didn’t have the details about when this would be ready. Huawei would do everything in its power to mitigate the impact of the U.S. decisions, Liu said.

The Trump administration late last week signed an order that could restrict Huawei -- which it says is obliged to support Beijing spying -- from selling equipment in the U.S. Washington also put Huawei on a blacklist, threatening its supply of American components from semiconductors to the Google apps that run on its smartphones.

‘Obviously there is a challenge here,’ said Liu. ‘I hope that very soon that the leaders from my consumer business group will be able to share with you our new strategy based on the new situation.’

Android continues to power Huawei’s smartphones globally, and the Chinese company depends on Google’s most popular apps to win mobile phone shoppers. Huawei phones outside China have used a version of Android that comes with a package of Google services, including search, Maps, YouTube and -- crucially -- the Play store for downloading a range of apps.

‘For existing models already in market -- there is no major impact,’ Liu said of Huawei devices running on Google’s Android. ‘For the future one, both teams are still working together to figure out what to do.’

Bloomberg reported late Monday that Huawei has been pitching app makers and European carriers in a bid to develop and spread its own mobile app store in Europe. The company’s proprietary app store would have been an important feature of Huawei’s own operating system, which it said last year it had started to build. That faces uncertainty now that U.S. companies may be restricted from contributing to it.

Huawei is said to have stockpiled enough chips and other vital components to keep its business running for at least three months. It’s been preparing for such an eventuality since at least the middle of 2018, hoarding components while designing its own chips, people familiar with the matter said.

Liu said Tuesday that while there might be ‘some minor impact of some components or parts, I can assure that the leading, advanced solutions has been safeguarded by our own back-up plan.’