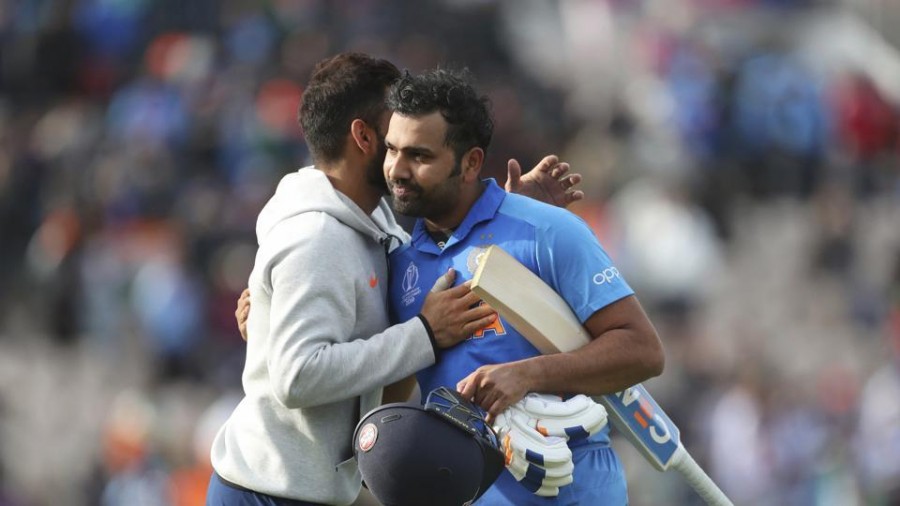 Rohit Sharma has 23 ODI hundreds – the third most by an Indian – and three ODI double hundreds – most in the world. But according to India captain Virat Kohli, none of those come even near to Rohit’s innings in India’s ICC World Cup 2019 opener against South Africa at Southampton on Wednesday. Kohli rated Rohit’s unbeaten hundred against South Africa as ‘by far his best’.

Chasing a modest 228, India cruised to victory on the back of Rohit’s 122 not out as they won with 15 balls to spare and live up to their tag as one of the favourites for the showpiece event. (Full coverage of ICC World Cup 2019)

“I think in my opinion this is by far his best ODI innings because of the kind of pressure the first game brings from a World Cup point of view,” Kohli said during the post-match press conference. “And then I know, as a batsman, when you go in and a few balls bounce like that, it’s not easy to gather yourself again and play in a calm manner.”

India were under a lot of pressure when after losing Shikhar Dhawan and captain Virat Kohli early. But Rohit (122 not out from 144 balls) punished the South African bowlers after being dropped on one and scored his 23rd ODI century.

Rohit did not care about his strike rate and instead focused on building partnerships and was prepared to grind in front of a fire-breathing Kagiso Rabada and Chris Morris.

“A lot of times batsmen tend to hit their way out of the situation. But he was very composed, he was very -- he’s played so many games, we expect a lot of maturity and a lot of responsibility from someone like him. But, in my opinion, of all the brilliant innings I have seen him play, I think this, for me, was the top of the pile because of the way he compiled his innings and at no stage did we feel like, or he felt like he is going to throw it away,” said Kohli.

Kohli also credited Rohit’s role in allowing the others to bat around him. The India opener first stitched an important 85-run third wicket stand with KL Rahul (26) followed by a 74-runs stand with MS Dhoni (34).

“I think controlling the game so beautifully from one end and allowing the others to display themselves and string in small little partnerships, looking at the fact that they were only chasing 228, he played the perfect innings for that kind of a situation on that kind of a wicket against a bowling attack that was threatening to pick up wickets at any stage. So, yeah, in my opinion, by far his best knock,” Kohli added.