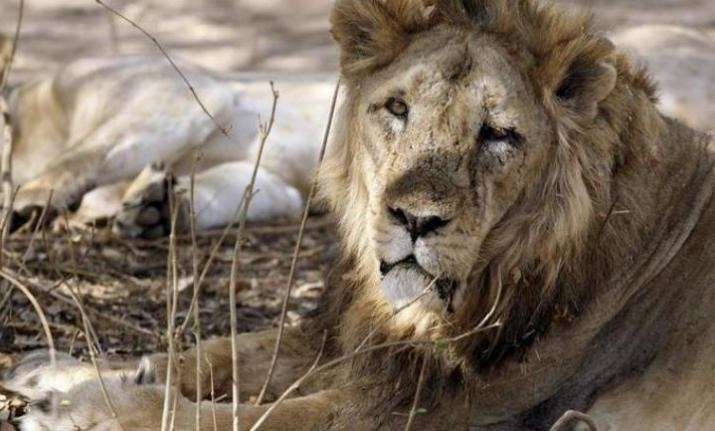 The administration in Gujarat has been working round the clock to stop illegal lion shows in and around Gir Sanctuary and National Park -- the only abode of Asiatic lions in the world. But it seems the measure have had little to no impact on some.

A video has emerged that shows a bike-borne miscreant indulging in an illegal lion show outside the premises of the sanctuary.

The biker can be seen dragging a carcass with his bike. In the dust trail that appears at the end of the bike can be seen a lion running towards the dead animal.

Gir forest and other protected areas spread across Junagadh, Gir Somnath, Amreli and Bhavnagar districts in the Saurashtra region are the only natural abode of Asiatic lions in the world. A number of lions freely roam through these areas, which in turn attract a large number of tourists.

Such bike-borne miscreants drag carcasses in order to make lions run after them -- a typical lion show. People pay them for these shows in revenue areas. Revenue areas are not considered part of the wildlife sanctuary.

The said video belongs to the Amreli region.

The forest department has taken cognisance of the video and a probe has been directed into the matter.

A few days ago, six persons, including a juvenile, were held by the forest department after they were allegedly caught red-handed organising an illegal lion show in revenue area Veraval taluka of Gir Somnath district.

The accused were detained by the staff of Junagadh forest division.