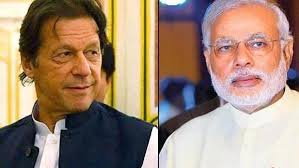 Reaching out to Prime Minister Narendra Modi for the second time since May 23, Pakistan Prime Minister Imran Khan has written a congratulatory letter in which he is learnt to have advocated working for durable peace and stability in South Asia and the peaceful resolution of all outstanding issues, including the Jammu and Kashmir dispute. The letter, The Indian Express has learnt, arrived through diplomatic channels about two days ago.

It is learnt, however, that there has been no proposal for a meeting in Bishkek in Khan’s letter to Modi. The letter follows an exchange of tweets between the two leaders after May 23 and a phone call between them on May 26.

This comes days before the two Prime Ministers are scheduled to be in the Kyrgyz Republic’s capital, Bishkek, for the Shanghai Cooperation Organisation summit on June 13 and 14. While the MEA spokesperson maintained that no meeting is being planned or organised to the best of his knowledge, sources did not rule out the possibility of a “pull-aside” meeting between the leaders.