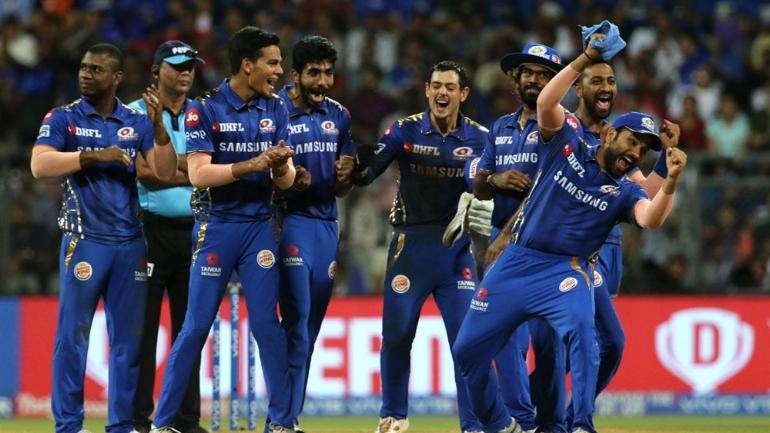 Mumbai Indians defeated Sunrisers Hyderabad via Super Over at the Wankhede Stadium on Thursday to become the 3rd team after Chennai Super Kings and Delhi Capitals to reach the playoffs of the 2019 Indian Premier League.

Sunrisers Hyderabad, who had reached the final in the 2018 IPL and lost to Chennai Super Kings, must now beat Royal Challengers Bangalore in their final group game on Saturday and hope the other results go their way to seal the fourth playoff spot.

Mumbai Indians had won the IPL for the third time in 2017 but failed to reach the playoffs after winning only 6 out of 14 matches in 2018. This season, MI have returned to their old ways and rode on some spectacular performances from Quinton de Kock and Hardik Pandya to bury the ghosts of last summer.

Manish Pandey led an incredible run chase for Sunrisers Hyderabad after the two big ticket overseas batsmen - Martin Guptill and Kane Willamson failed to make an impact. Pandey remained unbeaten on 71 and added 49 for the 7th wicket with Mohammad Nabi as SRH pulled off a thrilling tie to take the game to a Super Over - the 2nd of the season.

Chasing 163, Sunrisers Hyderabad lost openers Wriddiman Saha and Martin Guptill to Jasprit Bumrah after a rapid start. Kane Williamson, the Orange Cap winner in 2018, has been far from his best this season and he laboured his way to 3 before missing a sweep against Krunal Pandya - the ball hit the pads and he was out lbw.

In the absence of David Warner, Martin Guptil and Kane Williamson were expected to stand up and fill the void but their cheap dismissals left Manish Pandey with a lot of work.

Pandey has had a fine run after he was promoted to No.3. Vijay Shankar, who made it to India's World Cup squad for his 3-dimensional skills, never found ant momentum and became Krunal Pandya's second wicket while Hardik Pandya dismissed Abhishek Sharma as SRH slipped to 105 for 5 in the 15th over. With the asking rate climbing up, Manish Pandey was key Sunrisers.

A cracking shot off Lasith Malinga's last ball in the 16th over fetched Manish Pandey a boundary and a third fifty in 4 innings this season. He was looking good and had Mohammad Nabi for company at the other end. Rashid Khan and Bhuvneshwar Kumar were yet to walk in and though difficult, victory did not seem entirely out of reach for Hyderabad.

In a heroic effort, Manish Pandey led the chase for SRH single-handedly till he found support in Mohammad Nabi. It was a lost cause for Hyderabad but the pair of Pandey and Nabi held their nerves to pull off a tie. SRH needed 17 off the last over and 7 off the final over. Manish Pandey hit Pandya for a 6 to bring the scores level.

SRH sent Manish Pandey and Mohammad Nabi to face Jasprit Bumrah in the Super Over. However, the pair could not repeat their heroics and Pandey was run out in the 1st ball while Bumrah castled Nabi off the 4th ball and SRH managed only 8, setting MI 9 to win the Super Over.

Hardik Pandya hit Rashid Khan for a six off the 1st ball and then he and Pollard kept their calm to pull off a Super Over victory for Mumbai Indians.Rohit Sharma led a quick start for Mumbai Indians but Kane Williamson introduced his spinners - Mohammad Nabi and Rashid Khan to slow the hosts down. Rohit, who was looking good for a big score, fell to Khaleel Ahmed in the 6th over after Nabi took an easy catch at mid-on.

Rohit Sharma's opening partner Quinton de Kock took his time to get going but Suryakumar Yadav played a nice little cameo (23 off 17) and added 54 for the 2nd wicket with de Kock to set MI up nicely on a pitch which Yadav later described as sticky.

Quinton de Kock hit the slowest fifty of the 2019 Indian Premier League but accelerated towards the end of the innings to remain unbeaten on 69 and help Mumbai Indians set Sunrisers Hyderabad post a challenging target.

Mumbai Indians now have the chance to finish in the top 2 in the points table if they beat Kolkata Knight Riders in the final group match of the 2019 Indian Premier League on May 5.