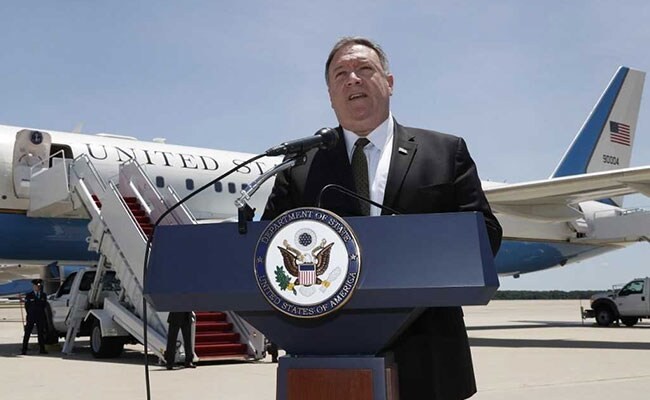 US Secretary of State Michael Pompeo arrives in India Tuesday fresh from a last-minute trip to the Gulf aimed at building a global coalition against Iran to tackle a different tricky subject: trade.

The visit - the first high-level engagement since PM Modi's sweeping mandate in last month's elections - comes ahead of a meeting between President Donald Trump and PM Modi on the sidelines of the Group of 20 Summit in Japan later this week.

"If the US seeks to contain China's rise, India is the obvious counterweight in the region," Katharine Adeney, director of the University of Nottingham Asia Research Institute, said in an email. "Although the relationship is in choppy economic waters, it is in the interests of both countries to seek to negotiate an outcome that fits their wider strategic priorities."

India raised tariffs on as many as 28 products, including almonds and walnuts, on June 16 in response to higher duties imposed by the US on products including steel and aluminium, after the Trump administration on June 1 ended trade concessions on $6.3 billion of Indian goods.

In the last few days, the US has sought to ease India's concerns over reports that Washington was considering capping H-1B visas to countries that force foreign companies to store data locally, as India does. There's a broad review of the H-1B programme underway, but it isn't targeted at India, whose technology workers have been leading beneficiaries of the entry permits, a State Department official said at a briefing on June 21.

Despite these differences, India's trade with the US has grown to $150 billion annually, while the US has emerged as India's top defence supplier in the last two years. They have pledged to deepen strategic ties despite the Trump administration's sanctions over buying oil from Iran and the purchase of defence equipment from Russia. The US is also embroiled in a dispute with Turkey over its plans to purchase the Russian-made S-400 defence system.

India succumbed to US pressure and gave up oil purchases from Iran when a sanctions waiver ran out in May, after imports soared to the second-highest level in the year through March 31. And while India has continued to seek a renewal of the waiver, Trump's threats of additional sanctions and the escalating tensions in the Strait of Hormuz after Iran shot down a U.S. spy drone will make that issue a difficult one to broach this week.

India has also been caught in the tussle between the US and China over trade issues. Even though the government in New Delhi shares strategic ties with the Trump administration, PM Modi is trying to rebuild relations with the government in Beijing that were strained due to a series of long-simmering border disputes.

India wasn't ready to make a call on whether to allow Huawei Technologies Co. to participate in the country's rollout of 5G telecommunications networks. "We will take a decision which will be guided by our economic and security interests," Foreign Ministry spokesman Raveesh Kumar said at a briefing on Friday. Huawei faces a ban in the US over fears that China's government could use its systems to spy on other countries.

"The relationship is at the crossroads," said Shashank, a former foreign secretary of India who uses only one name. Indians feel their interests have been harmed by US decisions such as the continuing trade wars and the review of professional visas, Shashank said.

US President Donald Trump said on Sunday he was not seeking war with Tehran after a senior Iranian military commander warned any conflict in the Gulf region could spread uncontrollably.

For Pompeo, the visit is an opportunity "to press the Modi government on its continued ties to Iran and Russia," said Richard Rossow, who holds the Wadhwani Chair in US-India Policy Studies at the Centre for Strategic and International Studies in Washington.

He said it's also a chance to "to determine if the Modi government, with its new electoral mandate, has additional flexibility to move on the commercial issues that have caused friction in the relationship."