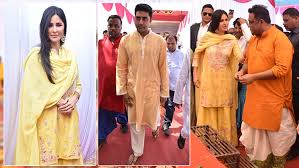 Pictures of Katrina, dressed in yellow, were shared online. The actor can be seen entering Basu’s residence and posing for pictures. Other pictures show her taking blessings from a ‘pandit’. Abhishek, dressed in a kurta pyjama, was seen having a chat with Basu. Abhishek will appear in the filmmaker’s next film, an ensemble piece also starring Rajkummar Rao, Fatima Sana Shaikh, Aditya Roy Kapur, Sanya Malhotra and Pankaj Tripathi.

Katrina, who starred in Basu’s ambitious box office failure Jagga Jasoos, was also seen embracing the director. Her former boyfriend Ranbir Kapoor played the lead role in the film, which he also produced.

Other actors seen at the puja include Patralekhaa, who was dressed simply in white and arrived with her sister, TV actor Ishita Dutta, who wore a blue saree, Sakshi Tanwar,who like Katrina wore yellow, Sumona Chakravarti and Asha Negi.