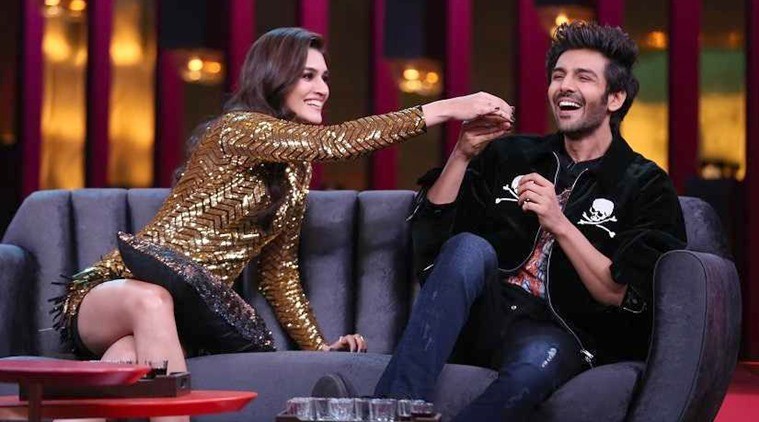 And having the last laugh was host Karan Johar, who left no chance to tease the Luka Chuppi actors with stars like Sara Ali Khan, Ananya Pandey, Sushant Singh Rajput and Aditya Roy Kapur.

Karan spoke to Kartik and Kriti about things like their breakthrough in Bollywood, dream roles and even nepotism. But more than anything, the entertainment factor soared when they spoke about their dating life.

Sara Ali Khan had openly declared her crush on Kartik Aaryan when she came on the celebrity chat show with her father Saif Ali Khan. Pointing at that, minutes into the show, KJo cheekily asked the million dollar question to Kartik – “Are you dating or interested in Sara?” Though the actor denied it, he added that he would think of that only after earning loads of money as Sara was a princess, and for the boy to be rich was one of the pre-requisites for Saif.

Soon, Kartik revealed that he did go on a movie date with newbie Ananya Pandey, pointing at their dating rumours. The actor also shared that he was good friends with Shraddha Kapoor.

Karan Johar then moved on to Kriti Sanon. He asked her if she was currently single, after breaking up with Sushant Singh Rajput sometime back. The actor said she never dated him and has been single for a long time now.

Karan revealed to everyone how he has been trying to be the match-maker between Kriti and Aditya Roy Kapur, as Adi found her cute, a detail that left even her surprised.

Later in the Koffee Shots round, Kriti, however, admitted to lying several times during the episode, to which Karan said he knows that. Kriti also said she would want Kartik to hook up with Sara.