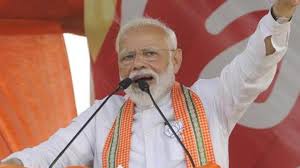 Keeping up with this, Prime Minister Narendra Modi is slated to address an election rally in Madhya Pradesh's Khargone.

Meanwhile, the campaigning for the last phase of Lok Sabha elections comes to an end today. Polling will be held on Sunday, May 19.

Stay tuned to this space as IndiaTVNews.com brings to you live and latest updates on the Lok Sabha poll campaign.

Punjab Chief Minister Amarinder Singh has said that he will "accept responsibility and resign" if the Congress party does not perform well in the Lok Sabha elections in Punjab.

"I would take responsibility and would quit if the Congress was wiped out in the state in these Lok Sabha elections. All ministers and MLAs have been made responsible for the Congress party's performance in the state," the Chief Minister said in a statement.

"The party high command had decided to hold the ministers and legislators accountable for the victory/defeat of the Congress candidates. I am ready to take the same responsibility for the state but I am confident that Congress will sweep all Lok Sabha seats in Punjab," Amarinder said.

Amarinder Singh returned as chief minister of Punjab in 2017 after a decade rule of Akali Dal (SAD) and Bharatiya Janata Party (BJP). Congress had won 77 out of the 117 seats in assembly elections with a vote share 38.5 per cent. Singh's first term as the chief minister of the state from 2002 to 2007.

Punjab will witness polling for its Lok Sabha seats on May 19. The counting of votes will take place on May 23.

Prime Minister Narendra Modi is slated to address an election rally in Madhya Pradesh's Khargone at 11:30 am today.

Campaigning for the seventh and final phase of Lok Sabha polls in 50 constituencies spread over six states and one union territory elections will come to an end this evening.

In West Bengal, campaigning in the remaining nine constituencies ended last night, a day ahead of the scheduled closing.

The Election Commission had curtailed campaigning in the state following violence during BJP President Amit Shah's roadshow in Kolkata on Tuesday.

Voting in 59 parliamentary constituencies will take place on Sunday.