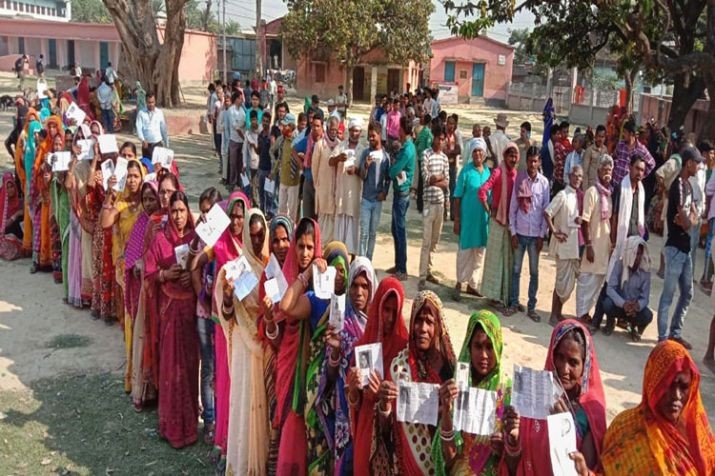 Fifth phase of polling in 2019 general elections is underway across 51 constituencies in 7 states. Overall voter turnout till 1 PM was recorded at 31.29%. While West Bengal, Rajasthan, Jharkhand and Madhya Pradesh recorded high polling, Jammu and Kashmir remained at the bottom with 6.54%. Polling for phase 5 of the Lok Sabha Election 2019 began at 7 am, in 51 constituencies across 7 states.

Nearly nine crore voters will decide the fate of 674 candidates, including political bigwigs Rajnath Singh, Sonia Gandhi, Rahul Gandhi and Smriti Irani, in the fifth phase of polling on Monday.

Voting is underway for 14 seats in Uttar Pradesh; 12 in Rajasthan; 7 each in Madhya Pradesh and West Bengal; 5 in Bihar and 4 in Jharkhand.

In Jammu and Kashmir, polling is underway in Ladakh, Pulwama and Shopian districts of Anantnag constituencies.Campaigning for this phase had ended on Friday and the votes will be counted on May 23.

Several election meetings were cancelled in West Bengal as the state witnessed a crooked cycle of campaigning during the past couple of days, in the wake of cyclone Fani.

Seats in which elections will be held in the state today are Bongaon, Barrackpur, Howrah, Uluberia, Serampore, Hooghly and Arambagh.

"Speedbreaker didi has tried to play politics even on Cyclone Fani. I tried to get in touch with Mamata didi but her arrogance is such that she refused to talk to me, I tried again but she did not get in touch," the prime minister said.

Modi further said, "Didi is so frustrated these days that she doesn't even want to talk or hear about god. The situation is such that Didi is arresting and jailing those who are chanting 'Jai Sri Ram'," PM Modi said in Tamluk.