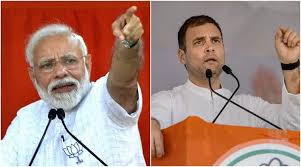 Keeping up with this, Prime Minister Narendra Modi on Tuesday will address four election rallies in UP, Bihar and Chandigarh.

Modi will be in UP's Ballia at 11 am, following which the prime minister will address public meetings in Bihar's Buxar at 12:25 pm and in Sasaram at 2:05 pm. PM Modi will also address a rally in Chandigarh at 5:50 pm.