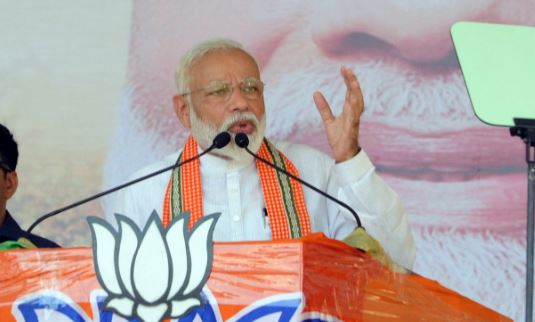 Targetting the SP-BSP-RLD alliance in Uttar Pradesh, PM Modi said, 'they worked only for their families. Mayawati went against the teachings of BR Ambedkar. Congress used the poor only for their vote-banks.'

India's poor don't want insult. They want to move ahead in life. It is my government that has worked for the poor: PM Modi in Ayodhya

Prime Minister Narendra begins his address at mega rally in Ayodhya, says 'Ayodhya is the city of Maryada Purshottam Ram'.

UP CM Yogi Adityanath arrives in Ayodhya, where PM Narendra Modi is scheduled to address a rally, in the first after he took charge as the Prime Minister in 2014.

A BJP delegation to meet Election Commission officials on Tuesday.