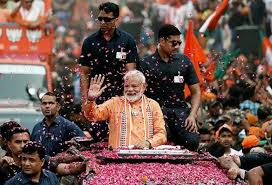 India is awaiting a new government and in the run-up to the Lok Sabha polls 2019, campaigners and warriors belonging to Prime Minister Narendra Modi's Bharatiya Janata Party (BJP) and Rahul Gandhi's Congress have got battle-ready.

Stay tuned to this space as IndiaTVNews.com brings to you live and latest updates on the Lok Sabha poll campaign.

"We are being defamed and they (BJP) are saying they will file defamation against us? We are going to send defamation notice to them today," he said.

got underway in Telangana.

A total of 6,146 candidates are in the fray. The elections began at 7 a.m and will go on till 5 p.m while, in Left Wing Extremism (LWE)-affected areas, it will conclude at 4 p.m, the State Election Commission had said.

The Supreme Court on Friday will conduct the hearing on the issues related to the Ayodhya Ram Janmabhoomi-Babri Masjid land dispute case, a notification said.

The court authorities published a notice on the apex court's website detailing on the composition of the bench that will hear the matter, and mentioned that the matter will be taken up at 10.30 a.m.

Priyanka Gandhi will be in Siddharthnagar, Basti, Sant Kabir Nagar and Bhadohi today.

Campaigning for the sixth phase of the Lok Sabha elections will come to an end today.

On Sunday, 59 constituencies spread across six states will go to polls.