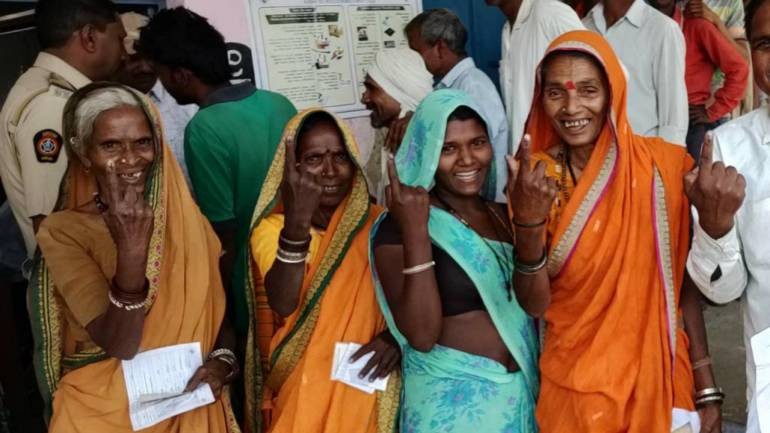 As 72 Lok Sabha constituencies across nine states, mostly in the Hindi heartland, go to polls today in the fourth phase of the 2019 Lok Sabha elections. These include 13 in Rajasthan, 12 in Uttar Pradesh, five in Madhya Pradesh, three in Bihar, three in Jharkhand, eight in Maharashtra & one in West Bengal. Overall voter turnout till 5 pm at 50.6 per cent. 55 per cent voting recorded in MP till 4 pm.

As 72 Lok Sabha constituencies across nine states, mostly in the Hindi heartland, go to polls today in the fourth phase of the 2019 Lok Sabha elections, the BJP will defend 45 of the seats it won in the 2014 Lok Sabha battle. These include 13 in Rajasthan, 12 in Uttar Pradesh, five in Madhya Pradesh, three in Bihar, three in Jharkhand, eight in Maharashtra and one in West Bengal. An estimated 12.79 crore electorate will be eligible to exercise their franchise in 13 seats each in Rajasthan and Uttar Pradesh, five in Bihar, eight in West Bengal, three in Jharkhand, six in Madhya Pradesh, 17 in Maharashtra and six in Odisha. Polling will also be held in the second of the three phases in Jammu and Kashmir's troubled Anantnag constituency. Voting began at 7 am. A host of celebrities have come out early in the morning in Mumbai to cast their votes. From Rekha to Priyanka Chopra, Ravi Kishan and Anil Ambani, several stars were seen voting in the fourth phase of Lok Sabha elections. Stay tuned.

The Election Commission said, "Today, at around 9:15 am, BJP candidate Sri Babul Supriyo went to booth no 199 at Kashidanga FP School under Barabani and went inside the booth along with his security guards, complaining that his agent was not allowed to sit. When the in charge of the booth, CRPF ASI Ram Navami Ram, protested the entry of security guards inside the booth, Babul Supriyo pushed him physically and entered the booth along with his security guards. His convoy of around 8/9 cars blocked the way of RT mobile vehicle of ASI Emdadul Haque. He used slang language against the RT officer saying 'dekh tor ki kori [See what we will do to you]'. His abusive language instigated the voters standing in the queue and they started protesting. In the chaos, someone from the crowd or someone from his supporters threw a stone at the rear shield of the candidate’s car which broke the glass. The QRT and the HRFS thereafter reached the scene and controlled the situation."55 per cent voting recorded in MP till 4 pm

The voting figures till 4 pm were as follows:

TMC leader Derek O'Brien has accused PM Modi of horse trading. In a tweet, he said, "Expiry Babu PM, let’s get this straight. Nobody will go with you. Not even one councillor. Are you election campaigning or horse trading! Your expiry date is near. Today, we are complaining to the Election Commission. Charging you with horse trading."