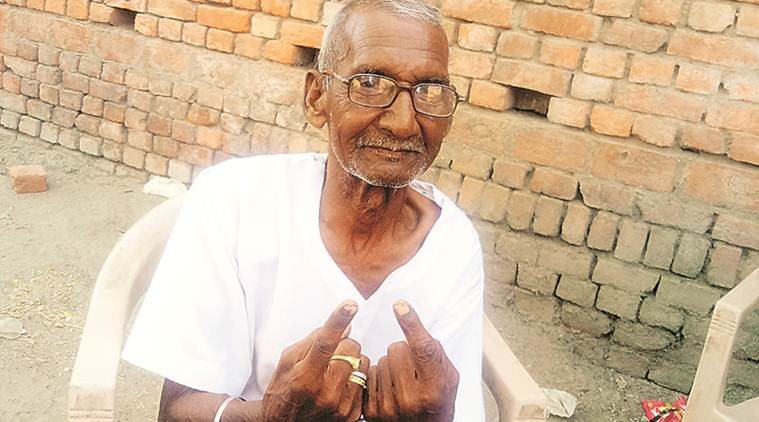 “Take back your money, we won’t sell our votes.” That, says Panaroo Ram, was what he told the former pradhan of his village and his associates, who “forcibly put ink” on his right forefinger, offered him “Rs 500”, and told him not to cast his vote in the Lok Sabha polls the next day.

The 64-year-old is among six Dalits from Jeevanpur in UP’s Chandauli constituency, who were allegedly offered money and threatened by a group led by former pradhan, Chhotelal Tiwari, who they claim is a “supporter of the kamal ke phool (lotus) party”.

All of them raised the alarm, prompting local SP workers to stage a protest and the police to intervene. On May 19, the six went on to cast their vote. This time, the ink was applied on their left forefingers. “The ink on the right is duplicate, the one on the left is original,” says Ram, lifting his hands to show the marks.

Chandauli SP Santosh Kumar Singh told The Indian Express that police have arrested Tiwari after an FIR was lodged on the night of May 18 against him and his supporters, Katwaru Tiwari and Dimple Tiwari, and other unknown people under IPC sections 147 (rioting), 171H (illegal poll payments) and 506 (criminal intimidation), and under provisions of the SC/ST (Prevention of Atrocities) Act.

Katwaru and Dimple are absconding. “We have taken note of the incident, and police are investigating the matter,” said Mughalsarai SDM Kumar Harsh. Local BJP leaders have denied any involvement in the incident.

Sitting inside his thatched house, Ram says the first alarm was raised by his daughter-in-law, Geeta Devi, after Tiwari and his associates reached the Dalit basti under the Alipur police station limits at around 9 pm on May 18. Naurangi Devi, 38, was among those targeted. “We were about to go to bed when the former pradhan arrived. My husband Bansidhar Ram, who works in a brick kiln, was at home. Tiwari threw two Rs 500 notes on the ground, held our hands one by one and put ink on our fingers before we could understand what was happening,” she says.

The Jeenpur residents also claim that they were allowed to vote only after protests by SP workers. (Express Photo By Pavan Khengre)

Her neighbour Badami Devi, 49, says that while Tiwari entered her house, his two associates stayed at the entrance. “My daughter Kiran shouted for me. But before I could get up, Tiwari inked my finger and left a Rs 500 note by the bedside,” she says.

By 10 pm, residents say, several of them had gathered to protest. “We went to the local police chowki, which ignored our call at first. But after the local media arrived, they took us to the Alipur police station. Tiwari is a supporter of the kamal ke phool party,” says Sudarshan Ram, adding that his finger was also inked.

The FIR quotes the complainant Birendra, who was among the group of six, as saying that “when we protested against the act of Chhotelal Tiwari and others as part of a conspiracy by Chandauli BJP candidate Mahendra Nath Pande, they used caste words against us and threatened our lives. We are in a state of fear”.

The Jeenpur residents also claim that they were allowed to vote only after protests by SP workers. “We are relieved that all six of us were able to vote. But what Tiwari did was unacceptable. We have the right to vote,” says Badami Devi.

Jeevanpur has a population of about 1,200 people, including about 400 Dalits and others of the OBC Yadav community. “Most of us have ration cards, but only a few are beneficiaries of central government schemes, such as Ujjwala and PM Awas Yojana. We have new electricity meters but they produce bloated bills,” says Bipin Kumar, a final-year degree student.

In 2014, the BJP wrested this Lok Sabha seat from the SP. The SP-BSP gathbandhan candidate from Chandauli, Sanjay Chouhan, says the six Dalits were allowed to vote after his party’s protests forced the administration to step in. “But there could be several others with fingers forcibly inked, who were not able to vote,” he says.