New Delhi / Lok Sabha full election schedule and dates: Voting from April 11 to May 19, result on May 23 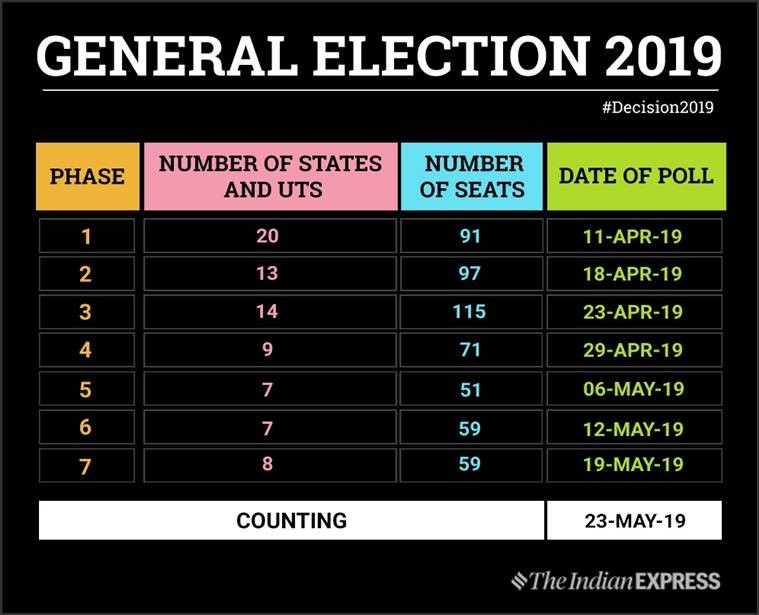 Let the games begin! Okay, the Election Commission of India did not actually say that but it did throw the grand Indian election season open, announcing the dates for Lok Sabha election 2019.

Here is how the voting will take place:

In a 100-minute press conference in New Delhi, Chief Election Commissioner Sunil Arora said that around 900 million -- or 90 crores -- people have been registered as voters for the 2019 general election. These include 1.5 crore new voters in the age group of 18 to 19.

Also, in a first, pictures of candidates will be displayed along with party name and party symbol on Electronic Voting Machines (EVMs).

Voting in those states would be held simultaneously with voting in the Lok Sabha 2019.

The Andhra Pradesh assembly election will be held in a single phase on April 11. The result will be out on May 23.

The Odisha assembly election will be held in four phases starting April 11. The result will be out on May 23.

THE POLLS ARE HERE

The 2019 general polls, which will elect the 17th Lok Sabha of India, is Narendra Modi's first re-election bid as prime minister. In 2014, Narendra Modi stormed into the prime minister's office with his Bharatiya Janata Party single-handedly winning an absolute majority.

The BJP won 282 seats -- ten more than the majority mark of 272 -- while the then ruling Congress was decimated, winning just 44 seats. The numbers have slightly changed since the 2014 Lok Sabha election, with bypolls and deaths of sitting MPs lowering the BJP's tally to 268 and increasing Congress's by one seat.

The BJP-led National Democratic Alliance, however, has a comfortable majority in the current Lok Sabha.

National security, employment, rural distress, and economy are some of the issues that will likely highlight the election campaign.

The Congress-led Opposition, which has been whispering about forming a 'mahagathbandhan' or grand alliance to take on the BJP, has been trying to corner the Narendra Modi government on economy and jobs.

A leaked government survey report suggests that unemployment in India reached a four-decade high during 2017-18. The Indian economy was also hit by the shock 2016 demonetization exercise, which wiped out 85 percent of currency in circulation overnight.

In the immediate quarters after the note ban exercise, India's Gross Domestic Product took a beating. GDP growth stabilized only in the last one year with experts saying that there is much more scope for improvement.

The Narendra Modi government has maintained that it has outclassed the Congress as far as helping the Indian economy grow is concerned. The government has also cited the Employees' Provident Fund Organisation (EPFO) data to paint a rosy picture of the employment scenario in the country.

Rural distress is another issue that will likely headline the Lok Sabha election campaign. The Opposition has been up in arms, alleging that the Narendra Modi government is not committed to protecting farmers.

The Congress, after coming to power in three states recently, has partly waived farm loans and has been demanding that the Narendra Modi government do the same on a national level.

The Modi government has resisted a national farm loan waiver; loan waivers are seen to be economically regressive and several experts, including sitting Reserve Bank of India governors, have cautioned against such waivers.

The Modi government, however, has increased support for farmers. On February 1, the day the interim budget was unveiled, the government announced it would hand out Rs 6,000 in three installments to farmers across the country. The first installment was handed out on February 24.

Economy, farmers and jobs aside, the real X factor in the Lok Sabha election 2019 will likely be Pakistan.

Faced with a crucial election, the Narendra Modi government had to respond and it did on February 26, with the Indian Air Force carrying out a "pre-emptive, non-military" airstrike deep inside Pakistan. IAF fighter jets bombed the Jaish-e-Mohammed's largest terrorist training center, located near Balakot in Pakistan's Khyber Pakhtunkhwa province.

Tensions with Pakistan have significantly risen since the Balakot airstrike. Skirmishes and mortar shelling has been reported from the Line of Control and Indian and Pakistani jets have gotten into an unprecedented aerial confrontation.

On February 27, Indian and Pakistani jets got into a dogfight over Jammu and Kashmir. An Indian MiG-21 and a Pakistani F-16 were shot down in the dogfight and IAF Wing Commander Abhinandan Varthaman was briefly captured by the Pakistani army. Vardaman's release cooled tensions.

This entire spectrum of developments with respect to Pakistan (including international media raising doubts about whether IAF bombs missed their target during the Balakot airstrike) may significantly alter the results of the Lok Sabha election 2019.

MOOD OF THE NATION

In January this year, India Today published its bi-annual Mood of the Nation survey. The poll, conducted between December 28, 2018, to January 8, 2019, predicted a hung Parliament if elections were held then.

However, it must be noted that the Mood of the Nation survey was carried out before the game-changing Balakot airstrike.

Will the daring IAF airstrike in Pakistan push the public mood in the Narendra Modi government's favor? Has Rahul Gandhi, who comes from a family of three prime ministers, scripting a remarkable turnaround for India's grand old party?

There will be surveys and opinion polls in the days ahead. But the greatest of them all will be the grand Indian general election 2019. And we will know the results on.