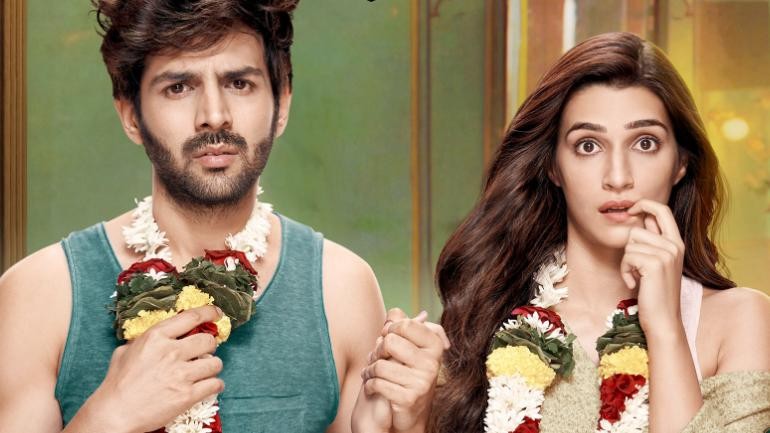 Luka Chuppi, starring Kartik Aaryan and Kriti Sanon, will not blow your mind, but is a good watch if you are looking for something fun this weekend, says our review. Laxman Utekar's Luka Chuppi explores the concept of live-in relationships in small-town Mathura and Gwalior, where they are heavily frowned upon. Kartik Aaryan and Kriti Sanon have an undeniably cute chemistry and deliver competent performances.

Guddu Shukla (Kartik Aaryan) is a star reporter at a cable news channel in Mathura. He falls in love with Rashmi Tiwari (Kriti Sanon), an intern and the daughter of the Mathura chief of the Sanskriti Suraksha Manch, a right-wing outfit that takes pride in beating up young lovers and 'upholding Indian culture'. (Anti-Romeo Squad, anyone?)

Despite being two consenting adults in love, Guddu and Rashmi barely manage to sneak in any time together, away from the prying eyes of the moral police. When he proposes marriage, she wants to get to know him properly and suggests a live-in relationship.

Guddu and Rashmi take up a 20-day assignment in Gwalior and decide to live together there. They pretend to be a newly married couple, with Rashmi wearing sindoor and a mangalsutra. Things take a hilarious turn when their families discover them living together and wrongly assume that they are actually married.Luka Chuppi shows none of the actual challenges of a live-in relationship. Barring a fleeting conversation that Guddu cannot chop onions and Rashmi has an aversion to cleaning toilets, everything is rosy in their paradise.

Kartik Aaryan and Kriti Sanon have an undeniably cute chemistry and deliver competent performances, although they look a bit too slick to be from a small town. However, it is Aparshakti Khurana as Guddu's best friend Abbas who steals the show with his deadpan humour. Unfortunately, Pankaj Tripathi is completely wasted in a trivial role, although he makes the most of it.

Rohan Shankar's writing flounders at times. Even though the dark satire and social commentary is on point at times - take, for instance, Rashmi's father's reaction when he learns that Abbas is a Muslim - the script suffers from some inconsistencies.From being a spunky woman who is willing to go against society to live with her lover, Rashmi inexplicably transforms into someone who suddenly wants to rush to the altar because she cannot lie to her elders. Her dreams of a career in Delhi are quickly forgotten.

The final sequence of Luka Chuppi is also a tad disappointing. After a lot of build-up, things fall into place a bit too conveniently.

However, Luka Chuppi is filled with hilarious moments, particularly the sequence of the nosy neighbour who spies on Guddu and Rashmi. Each of their unsuccessful attempts to get married also elicit a lot of laughs.

Director Laxman Utekar captures the eccentrities of a small town to perfection and thanks to its crisp run-time, Luka Chuppi hardly has a dull moment.

Luka Chuppi, starring Kartik Aaryan and Kriti Sanon, will not blow your mind, but is a good watch if you are looking for something fun this weekend, says our review.